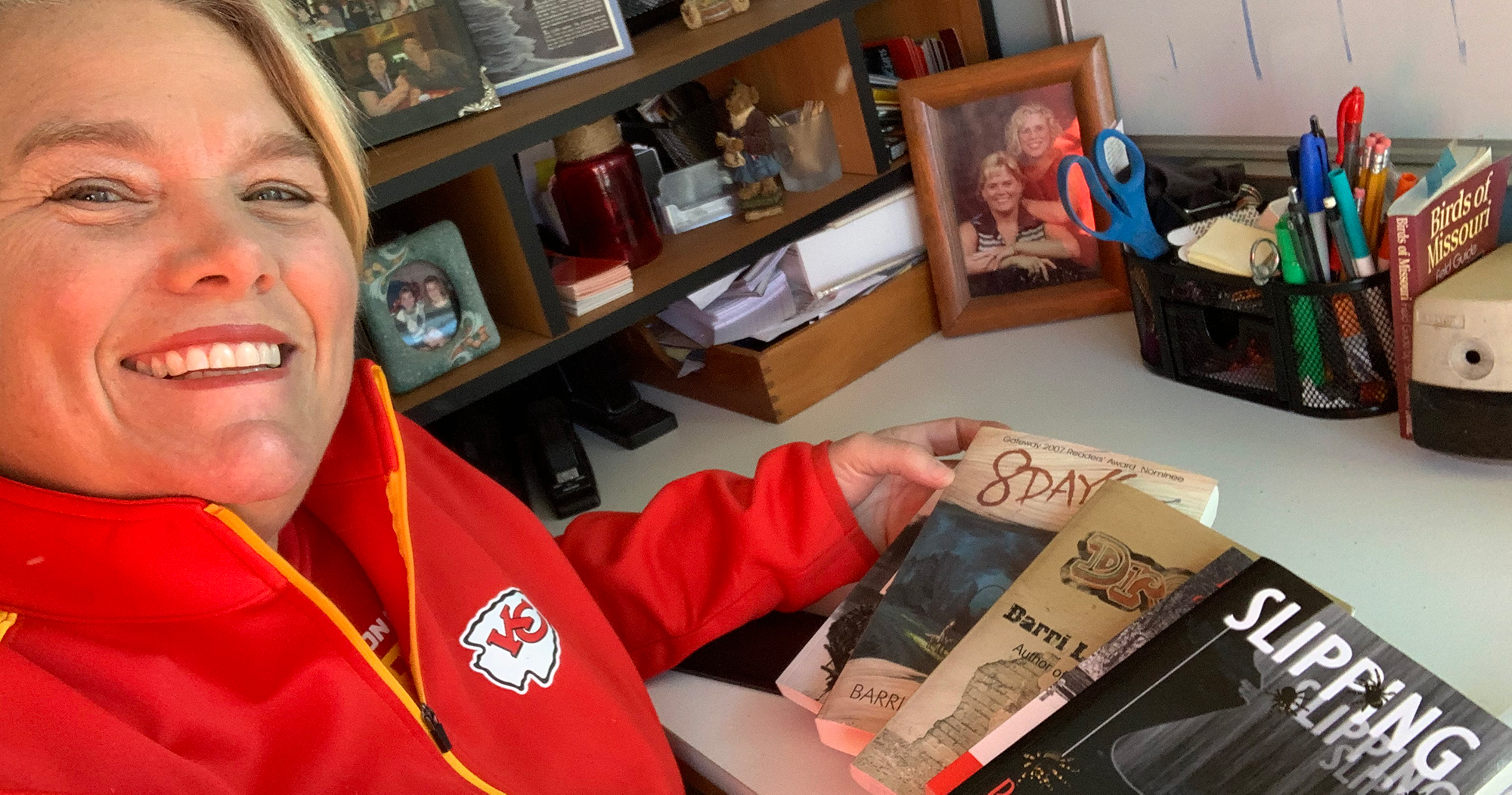 Dr. Barri Bumgarner is known on campus for her characteristic broad smiles and easy laughter that both put students and others at ease – qualities at odds with her private obsession. The Chair of the Department of Education logs countless hours researching grisly murders and writing chilling thrillers that rival Stephen King’s creepiest novels.

In fact, Bumgarner’s 12 years of research on a Columbia, MO, murder was so thorough, the Oxygen network recently featured the College’s Digital Blue guru in its latest true-crime drama, An Unexpected Killer. Bumgarner’s expertise on the subject also will be featured in an upcoming episode of Dateline NBC.

Bumgarner recently sat down with Westminster Today to discuss her research and writing side gig that rivals her other love: teaching Westminster students how to teach and follow their passions.

How did you become interested in investigating a local murder?

I started reading the news articles, and on a whim, I wrote Rios [the convicted individual] a letter while he was in the Fulton prison. He wrote back that he would not allow me to interview him, but he would interview me. I was like, “Wow, that’s a lot of arrogance for a cop convicted of murder.” But I was intrigued. And thus the interviews started. I’ve interviewed him over 200 times, and I have conducted more than 100 other interviews with jurors, the prosecuting attorney, defense attorneys, fellow cops and Jesse Valencia’s [the murder victim’s] friends and mother. I have spent hundreds and hundreds of hours on interviews and research.

You’ve written three novels: 8 Days, Slipping and Dregs. Can you discuss how you became interested in writing murder mysteries?

I’ve actually written all kinds of books, but it’s the thrillers that sold. My YA [Dregs] sold well, but my bestseller was Slipping. 8 Days [a homage to King’s The Stand] has a sort of cult following. I did all kinds of cons ― Archon, Show-Me Con ― and had hundreds of folks who would come and ask about the prequel. I have written it but just haven’t worked hard at getting it published. I had a solid publisher and an agent when I started working on my Ph.D. My writing life was sidelined during my dissertation, and I’m just now getting back into the flow of being a writer.

You joke about being on an FBI watch list and that Homeland Security contacted you about some of the contents of two of your novels. Please explain.

Writing 8 Days landed me on an FBI watch list. It’s about four young scientists who attempt to cleanse humanity of our weaknesses and finally eradicate racism, classism and ethnocentrism. I was placed on the list because I was doing follow-up research just after 9/11. Slipping, which was reviewed by the Washington Post and compared to The Silence of the Lambs, is a psychological thriller that Homeland Security contacted me about. The book involved research into the chemical cocktail the Russian army used on the Chechen rebels. I joke that I was teaching junior high at the time, and it drove me to kill … I was a literary mercenary, if you will!

Which do you enjoy more, teaching or writing/investigative work?

Teaching, without a doubt. I went part time from 2003 to 2005, and that was a dream. If I could’ve continued that (sold a bestseller!), I would have. While I love to write, I live to teach. I absolutely LOVE to write, so teaching writing is probably my truest love. But to quote Charlotte Bronte, “I write because I cannot not write.” I’m compelled to write whenever I can. I try to write something every day, though during the semester, it’s tough. I will likely retire from teaching at some point, but I will never stop writing. It’s why when my mom was diagnosed with Alzheimer’s, I was so worried about the heredity of it. I watched her lose her love of reading and everything that made her who she was. The smartest person I ever knew. I’m terrified I’ll lose my love of books, of the craft of writing.

Which do you prefer: fiction or nonfiction?

I can’t wait to finish the two nonfiction books I’m working on, because I absolutely prefer to write fiction. Interestingly, it takes more research to write fiction. You have to be spot-on when writing about things you’ve never experienced, like murder, being a cop or being faced with the possibility of the world ending. And I have at least seven projects I’ve started that I want to finish. I have almost finished a sequel to Dregs, I have started a sequel to Slipping and the prequel to 8 Days is all but completed. I want to get back to fiction! I do enjoy researching and investigating this information, but I prefer to write it creatively, what Truman Capote dubbed “creative nonfiction” when he wrote In Cold Blood, which is one of my all-time favorite books. So both of my nonfiction books will be written more creatively. 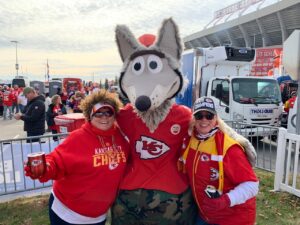 Although teaching others to teach is Dr. Barri Bumgarner’s favorite activity, the Westminster faculty member maintains a number of interests. Bumgarner, left, and her best friend, Marsha Tyson, clown around with the Kansas City Royals mascot, K.C. Wolf.

What are your other hobbies/interests?

I am a voracious traveler (my bucket list of places I want to go is very long), I read about 150 books a year, I love being outdoors (in my pool, in my hot tub, at a ball game, etc.) and I’m a fanatical Kansas City Chiefs fan and go out on a limb to dress up as one on Halloween. This year I had the Mahomes hair and everything. I also am a fan of the Mizzou Tigers and the St. Louis Cardinals, because they don’t play baseball in Kansas City (okay, I’m not over the 1985 World Series). And I LOVE professional tennis. I’ve been to the U.S. Open, and next summer, I’m trying to go to Wimbledon. I’m also a newly anointed St. Louis Blues fan. I love movies and can’t wait to see the new Star Wars movie! I also love to do jigsaw puzzles and collect vinyl (I have every album the Beatles ever recorded), and I like to spoil my furry kids to the point that it’s disgusting. My friends say I treat my puppies better than most people treat their children, and in the words of Billie Eilish, “Duh!”