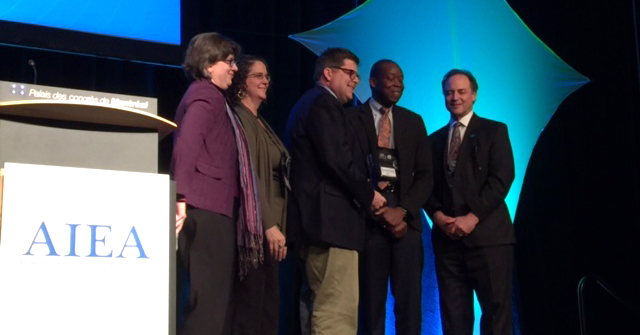 The Association of International Education Administrators (AIEA) has awarded Westminster College in Fulton, MO and its Churchill Institute for Global Engagement the 2016 “Innovation Award in Internationalization,” one of our major awards presented at the AIE annual national convention in Montreal, Canada, at the Palais de Congres on February 22, 2016.

This award was given specifically for Westminster’s “Take-A-Friend-Home” program which was established in 2008.

The program makes it possible for one domestic student and one international student pair to travel to each other’s home to learn about the unique cultural differences in each national context.

Some 66 Westminster students have participated in the program since its founding and it is funded by the endowed Piper scholarship fund.

Dr. Kurt Jefferson, Assistant Dean for Global Initiatives and Director of the Churchill Institute for Global Engagement, wrote the application for the award and attended the meeting.

“It is indeed a great honor for the college to receive this award,” says Jefferson.  “To have an association with 430 members from over 35 countries recognize our effort at internationalization is an accomplishment.”

The Churchill Institute is the hub of all international activity at Westminster College. The Institute simultaneously projects the Westminster experience beyond, and brings the wider world to, Central Missouri in a unique and dynamic fashion. Building on the inspiration of the past and on the leadership qualities of Churchill himself, the Institute weaves together international education and leadership.

Founded in 1982, the Association of International Education Administrators (AIEA), hosted at Duke University in Durham, NC, is a professional membership organization composed of institutional leaders representing over 300 institutions engaged in advancing the international dimensions of higher education.