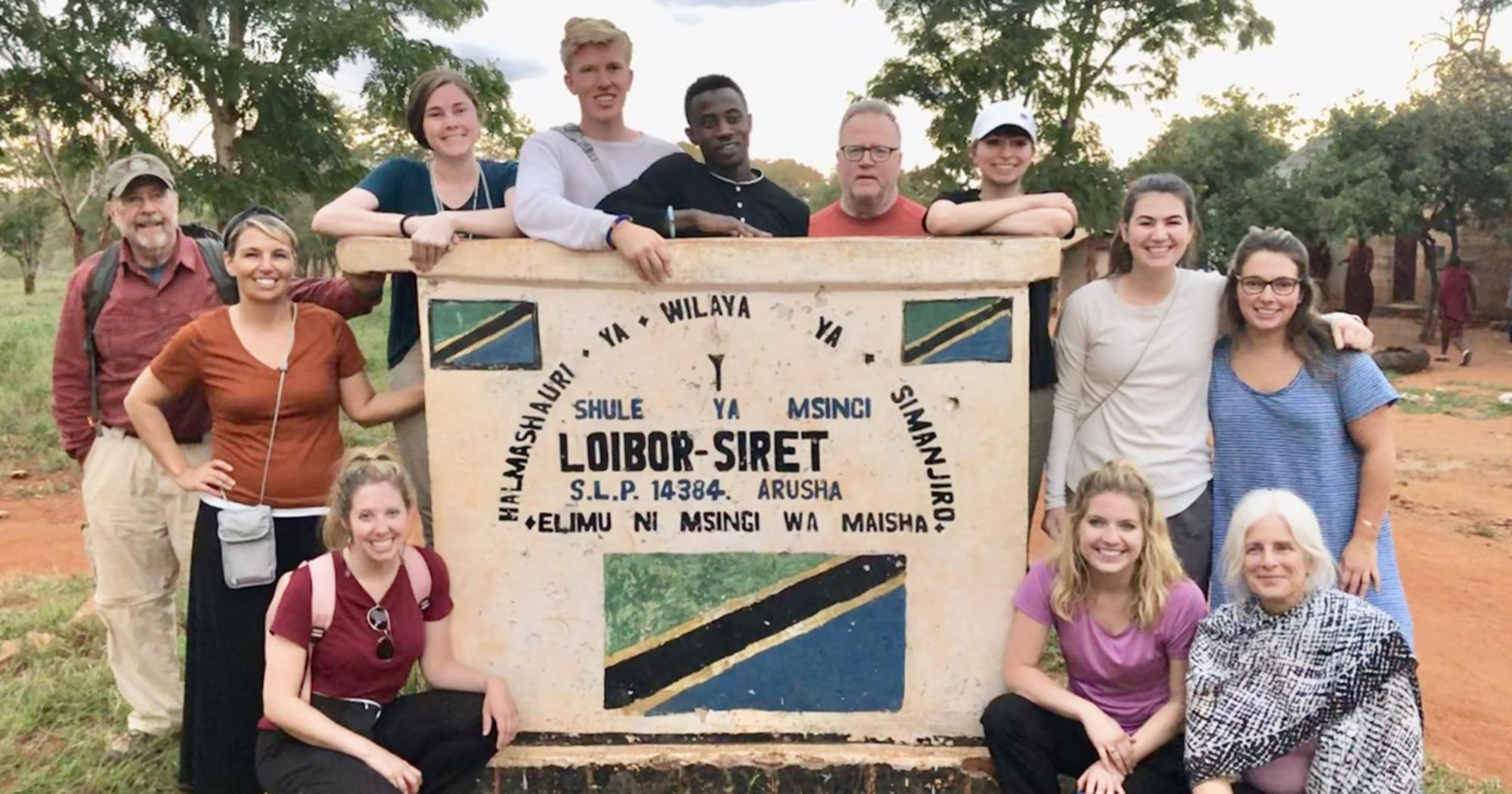 Madison Ekern, ’20 ΚΚΓ, and Jepthe Ngendo, ’20, are college students with a rare set of skills. They can tell you how to sever and tie a square knot in an umbilical cord and how to keep a mud-floored hut as hygienic as possible during a home birth. And they are equally serious and nonchalant about their seemingly random abilities.

Ekern and Ngendo recently returned from a month-long journey this summer throughout East Africa with four other Westminster students and three alumnae. The humanitarian trip focused on helping women and children with everything from safe birthing practices to menstrual hygiene for middle school girls to inspiring kids to stay in school.

Through a grant from Humanity for Children and help from Rotary Clubs in Fulton, MO, and Babati, Tanzania, the students were able to travel with Professor Emeritus of Leadership Dr. Bob Hansen and Health and Exercise Science Instructor Dr. Amanda Gowin. Alumnae Madison Rybak, ’19 ΚΚΓ, and McKenna Peters, ’19 ΚΚΓ, led the charge to bring menstrual hygiene education to remote areas of Tanzania through grant money they received from Projects for Peace through the Davis Foundation.

The trip was the fourth for Gowin and 14th for Hansen. The president of Humanity for Children — an international organization based out of Columbia, MO — Hansen says he began involving Westminster students in the humanitarian service experiences after a 2007 sabbatical in East Africa.

With 30 years of teaching at Westminster behind him and more than a decade of travel to East Africa under his belt, Hansen isn’t about to stop taking students with him. 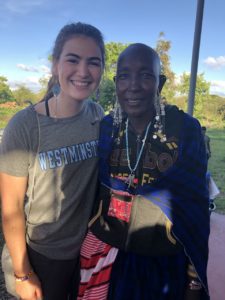 “There is nothing better than watching students make connections between what they are experiencing in East Africa and what they have learned in Westminster classrooms,” he says.

Ekern agrees and says that traveling to a remote part of the world is the absolute highlight of her Westminster education, adding weight to her already substantial double major in public health and psychology.

“I never realized how much we take for granted living in the U.S.,” she reflects. “It makes you realize that things we get so hung up on in our lives are completely irrelevant.”

First Phase of the Journey: Tanzania

The distribution took place under the watchful eyes of a professional midwife educator and various traditional birth attendants, who requested the tools for their day-to-day responsibilities.

Hansen explains that the input from the Tanzanians is paramount. “Humanity for Children doesn’t believe in saving, adopting or rescuing the people we work with in East Africa. They are extremely hardworking, intelligent, creative and community-oriented,” he says, adding that the Westminster group provides requested services and gets out of the way. “We just give them encouragement, resources, hope and, in some cases, expertise. These are their programs, not ours.” 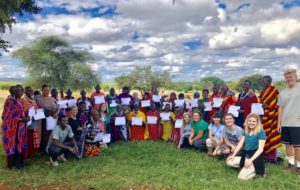 In providing a bit of expertise, the students aided the traditional birthing attendants in educating women about birth and what to expect should a nurse-midwife not be available to them — a reality faced by many when the nearest birthing station might be 20 miles away on foot from a family’s thatched-roof home, where lions, hyenas and jackals roam freely. Following instruction, each woman in the classes received a certificate of completion. 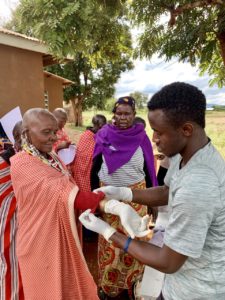 For his part, Ngendo says he was relatively unphased by helping women deal with such an intimate, woman-centered subject in less-than-perfect conditions by Western standards. The human rights and conflict resolution major grew up in a refugee camp in Uganda.

Quiet and serious, one senses Ngendo has witnessed more than he freely admits. Meanwhile, he does admit that he can speak Swahili, the native Tanzanian language, as well as Kinyarwanda, which is the main language Rwandans speak.

“I used this as an opportunity to connect with people easily and to help with other translators when it was needed,” he says, simply.

A significant part of the trip involved traveling to a school in the village of Loibor-Siret, where students were led by recent alumnae Peters and Rybak to teach approximately 100 middle school-aged girls about menstruation.

The girls were provided kits that included two pairs of underwear and disposable pads, which Ekern says are vitally important items for the girls.

“There is a lot of shame about menstruation in their culture, and the girls tend to miss a lot of school, because they will not attend while on ‘their days,’ as they call them,” she explains. 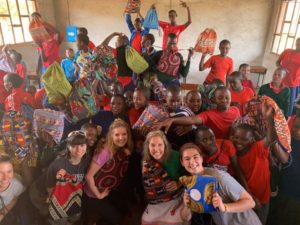 The Westminster group taught a separate class of about 120 boys about puberty and the importance of respecting women.

“Quite often the boys won’t understand what the girls are going through, and they will make fun of them,” Hansen explains. “Then a girl might not go back to school, and her father will then marry her off at the age of 12 or 13.” He adds that often the girls will become pregnant and starve themselves so their babies remain small and will therefore be easier to deliver.

Which brings Hansen back to his point about bringing materials and services to the area based on what the people say they specifically need. Some of those materials included gender-specific books about puberty, written in both English and Swahili, which the group distributed to both the girls and the boys. Translators helped discuss the sensitive information.

“They were a little uncomfortable when we started the talks, because they typically don’t discuss menstruation and puberty in their culture,” Ekern says of the translators. “But by the end, they were really into it and thanked us.”

Second Phase of the Journey: Rwanda

After the whirlwind of activities in Tanzania, the group was ready to dive into additional hands-on work in Rwanda.

The Westminster group distributed solar study lamps to 275 fifth-grade students in Gashanda, Rwanda. Part of the Bright Light Campaign, the lamps provide essential light to students who are unable to study at night because of a lack of electricity. The solar lights also help those who study by kerosene lamps and candlelight — both of which are costly and can be dangerous. 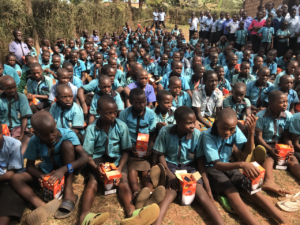 Hansen explains that students often come home from school and immediately begin long hours of chores they do not complete until after dark.

He adds that Westminster students founded the Bright Lights Campaign six years ago and that the project is going strong today as a result of the students’ experience and initiative.

“It’s one thing to talk about economics, health behaviors and community development,” Hansen says thoughtfully of Westminster’s efforts. “It’s another to see it up close and be personally involved with it.”

Another phase of the journey that Ekern says she particularly enjoyed was representing Soccer Goodwill Ambassadors and meeting with children at various schools. A Blue Jays soccer player, Ekern delved into the soccer clinics, which involved teaching skills to 50 to 120 kids at a time. The Westminster group also spoke at various schools, reaching more than 2,000 students overall. 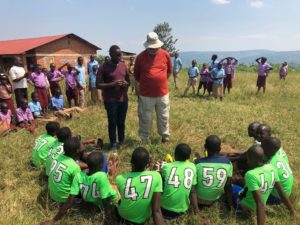 Ekern says the clinics and group presentations primarily served as a method to inspire kids to stay in school.

“We also taught lessons on gender-based violence, health and respect,” Ekern adds. “And we had a lot of fun.

The Westminster group also participated in listening sessions at various economic empowerment projects throughout both Tanzania and Rwanda, helping monitor income-generating projects that are run by families and villages.

Hansen emphasizes that many projects in the area today are completely self-sustaining, which is the ultimate goal of his efforts. He says a group will return to the area in January 2020 to evaluate how current projects are progressing while beginning attempts to launch other projects, which include installing solar power at two health clinics, building a birthing center and establishing a technology learning center, complete with a variety of computers, at a remote secondary school.

Hansen adds that watching the Westminster students transform while they help with the initiatives makes the journeys worthwhile. 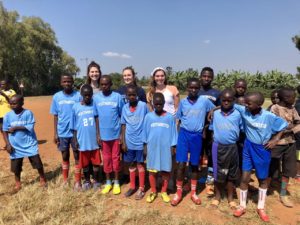 “All teachers are excited when they see their students have ‘Aha!’ experiences,” he says. “I’m lucky to see this every day with our students when they are in remote villages.”

Ultimately, Ekern and Ngendo say the trip was meaningful enough that they both want to go back. And they say a primary factor in their return is how well they were received in both countries. 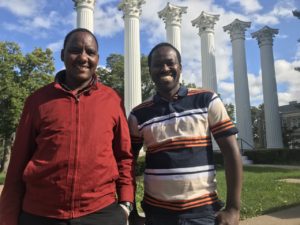 Two Humanity for Children representatives from Tanzania and Rwanda have worked directly with the Westminster group on multiple trips to East Africa: Israel Kioki, left, of Tanzania, and Jean Fiacre Haliyamutu, of Rwanda, serve as guides for the group. Dr. Bob Hansen recently returned the favor by escorting the two to various Humanity for Children offices throughout the United States. They stopped briefly at Westminster College before traveling to Washington, D.C.

Ngendo says that the people the Westminster group encountered throughout the trip were highly receptive to their efforts.

“How Americans are received in these situations depends on the general approach of the group,” he reflects. “The team did a great job respecting their culture and giving their service, which created a good relationship and sense of trust.”