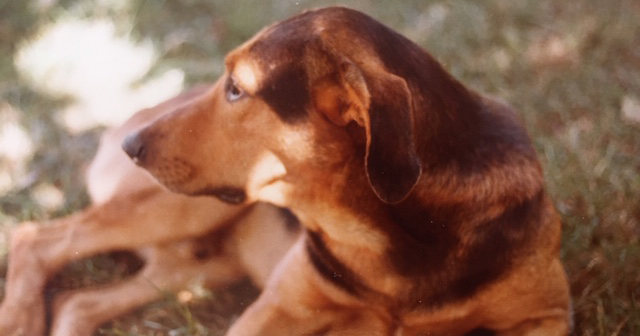 On April 3, Westminster Today asked the alumni community to name the above mystery mutt, beloved by many and often found roaming the Hill in the late 1970s and early 1980s.

Kurt Rutz, ’80, head track and cross-country coach at Mundelein High School in Mundelein, IL, was the first in a long list of alumni to name the furry Westminster “alumnus”: Nubs.

“I can remember one of my first days in class, freshman year, in the old science center. I was sitting in the class, hot as blazes, and the classroom door was standing open, and Nubs walked halfway in and looked around the room,” Rutz recalls. “The professor paused, looked over at him and said, ‘Hi Nubs! See anyone you know?’ Nubs looked around and left, apparently not satisfied with the group he saw. The professor shrugged his shoulders and continued. I remember thinking, ‘Man, that dog runs this place!’”

Many who responded were quick to point out that Nubs could be found everywhere but belonged to no one. Sally Reynolds, former Director of Career Services, who died in March 2020, apparently became Nubs’ surrogate parent during at least one summer and displayed the above photo of him on her desk for a number of years.

Some alumni, who ask to remain anonymous, claim Nubs might have been christened “Nubs” after Nub’s Pub, a popular downtown establishment where some “studied” for hours each week. But most won’t offer further details. What many will admit, however, is that Nubs was known for killing moles, surviving a hawk attack, living temporarily in Sweazey Hall,  protecting the cross-country team from angry farm dogs during long runs and, most of all, for being “A Good Dog” — words that Reynolds inscribed years later on the pooch’s grave marker.

May Nubs and Reynolds both rest in peace while their cherished memories live on.