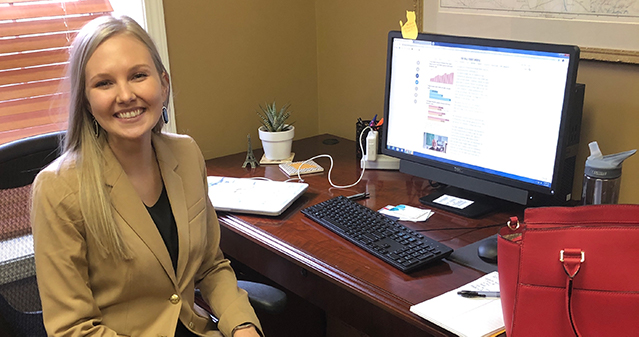 Westminster student Olivia Wilson ’19 ΚΑΘ has made a name for herself by testifying at the Missouri State Capitol in Jefferson City. As President of the Keep Me in College Coalition, the Kansas City, MO, native testified Jan. 23 before the House Appropriations Subcommittee on Education to increase funding for the Access Missouri Grant. Read more about her testimony here.

Through the Keep Me in College Coalition, Wilson keeps an eagle eye on funding for Missouri scholarships and grants. And doing so isn’t just a hobby or resume-building exercise for Wilson. Without Access Missouri, Wilson says a Westminster education would not be affordable for her.

So far, Wilson’s efforts are paying off.  Her testimony last year helped bring down a bill that sought to require Access Missouri and Bright Flight Scholarship recipients to remain in the state of Missouri after graduation. HB 2408 proposed students pay back funds received if they moved out of state. Read more about Wilson’s testimony against HB 2408 here.

Overall, Wilson, who is double majoring in Political Science and Transnational Studies, says she feels her testimonies are serving their intended purpose. “Legislators are really responsive — not a lot of students testify, and Keep Me in College really forms a bridge between legislators and students,” she says.

Wilson officially became a registered lobbyist three weeks ago and says she plans to pursue a career in that field after graduation this spring. “I would really like to keep doing this,” she says.