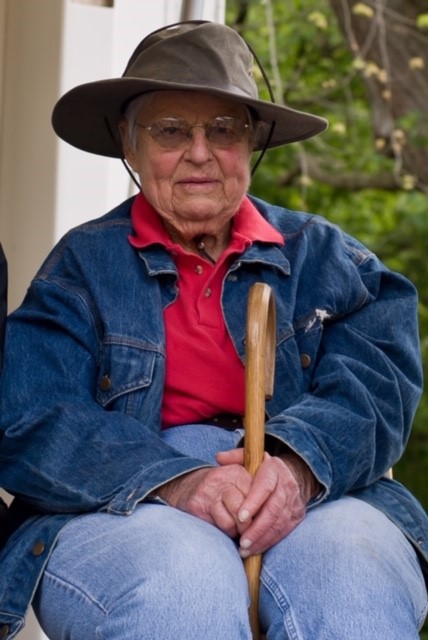 “The only way you can really keep something is to make it valued by everybody.”  This was just one of the wise sayings by Hilda “Pat” Jones who lived up to those words before she passed away Monday, December 17, at her beloved family farm in Williamsburg at the age of 93.  Pat was valued by everyone because she devoted  her life and her fortune to teaching people to learn and appreciate the beauty of Missouri’s natural surroundings and the need to conserve them. Many times the students of Westminster College were the beneficiaries of her mission.

Although she grew up in the city of St. Louis, most weekends she and her family spent on float trips down the Meramec River and eventually bought a property near Eureka so her love of the outdoors began early in her life.  In fact, one of the most important events in her life occurred on one such nature outing.  In high school she took a spring break bicycle trip through the Ozarks with the boy who would become her husband, Edward “Ted” Jones.  Ted was the son of the founder of Edward Jones and managing partner of the company from  1968-1980.  Ted, who died in 1990, could have taken the company public and become a multi-millionaire but never did because he said he had everything he needed, which included “a wife who loves me in spite of my faults, too much to eat and a dry place to sleep,” a business he enjoyed, a farm and home he loved, a few close friends, a horse he loved to ride who came when he called her, and four dogs–two who loved him, one who loved everybody, and one who loved no one but still followed him everywhere.  As Ted put it, “money has never been my God.”

What Ted and Pat did with their money was leave a legacy of conservation to the state of Missouri which will benefit generations to come.  Because they wanted young people to appreciate the wondrous sight of where the Mississippi and Missouri rivers converge, they donated funds for the creation of the Edward “Ted” and Pat Jones Confluence Point State Park.  Ted’s friend showing him  on a visit to Wisconsin what the state had been able to do with a rail-to-trail project led to Ted and Pat giving $2.2 million to acquire and build the Katy Trail State Park.  Their generosity also created the Prairie Fork Conservation Area, the 711 acres in eastern Callaway County where many Westminster students as well as students of all ages and locations come to learn the lessons of nature and good conservation practices.  Young visitors who  come to Prairie Fork are first greeted with a sign encouraging them to “Learn…Have Fun…Get Dirty.”

One of Pat’s many worthy causes was our STEM Academy.  Her philanthropy helped initiate the program, and she made it possible for many students to benefit from its programs because of her scholarships.  One of the yearly STEM Academy activities for the students is conducting fieldwork at Prairie Fork where over 5,000 students visit annually.  Dr. Dawn Holliday, Associate Professor of Biology and Environmental Science is very grateful for Pat’s commitment to the Academy.  “Pat Jones was a champion for the environment and a generous supporter of the Westminster College Summer STEM academy for high school students,” says Dr. Holliday.  “Her legacy will continue to live on and inspire people of all ages to experience science and enjoy the natural world.”

Pat was also a member of our President’s Club and has made numerous contributions over the years to enhance the Westminster learning experience.  As the first woman in the state to earn a degree in soils from the University of Missouri, she understood the value of a good education.

She was fond of saying: “We don’t have any kids so we adopted a state,” and what she and Ted have done to showcase and protect the natural beauties of Missouri and provide opportunities for children of all ages to learn from them are truly remarkable feats.

Recently, Pat had been hospitalized locally for her heart condition, but when it became apparent she was going to need to transfer to a larger hospital for much more evasive treatments, she chose to return to the farm for her last days with her rescue dog Gunner by her side.   Her longtime friend who had started working for Ted years ago and continued to build the Prairie Forks legacy by her side, Jamie Coe, says knowing Ted’s birthday was coming the next day on December 18, Pat wanted to celebrate it with him.  He  says no funeral services will be held because Pat chose to donate her body to science, but a celebration of her life will take place in the spring when all of nature comes to life in full bloom at Prairie Fork.

This remarkable woman, who became known as the “Prairie Godmother,” will be greatly missed but the countless lives she touched and the countless generations of lives she will continue to touch through the state parks and conservation areas she and Ted made possible are a powerful legacy.  To quote Pat:  “The whole country is defined by the ground they’re on.”  Pat Jones stood on rich, fertile soil as genuine, reliable, and giving  as she was, and  it will continue to make our world a more beautiful place to live, just as she did through her life of kindness and generosity. 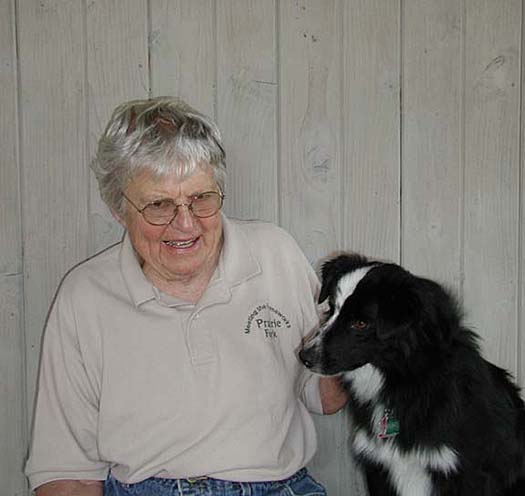