Alumna Opens School in Spain and Mixes Business with Pleasure 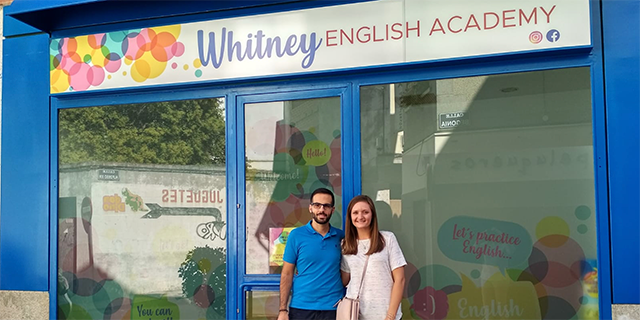 Whitney Griffin, pictured in front of the school she founded this fall, says many of her students find out about her through her almost 10-year reputation as an accomplished teacher of English as a second language. Also pictured is her boyfriend, Javier Guerra Jiménez.

“I’m the owner, but I play many cards,” she says. “I am also the teacher, cleaner, publicist, promoter, etc.”

The 110 students at the Academy range in age from three to adulthood and attend the Academy with the sole purpose of learning English. Griffin explains that Spanish people spend a lot of their free time learning languages, and they typically learn from traditional textbooks in order to pass the Cambridge English Language Exams. Yet she emphasizes her classes are different. 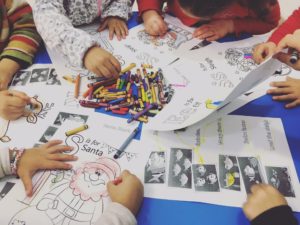 “We use the Cambridge texts, but our classes are interactive, and we try to play games as much as possible,” she says. For an example of Griffin’s hands-on teaching techniques, where her younger students learn words such as “sprinkles” while playing a fishing game with magnets, see below.

Griffin’s obvious enthusiasm for teaching and cultures began while she double-majored in International Business and Spanish at Westminster. She explains that she arrived at Westminster with the intention of playing basketball but says her love of travel and languages began to take precedence, which was a good thing.

“Thanks to the opportunities that Westminster students have to play sports, be in sororities, and participate in clubs and organizations, I was able to explore different options and really follow my heart,” Griffin says. 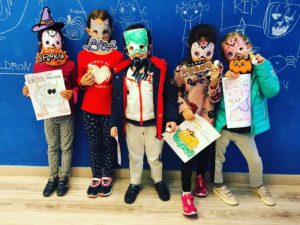 Ultimately, Griffin’s heart was in Spain. She studied abroad there twice during her undergraduate years, completing both a spring and summer semester in Salamanca, Spain, and a summer intensive month in Málaga, Spain.

After returning to Westminster, Griffin began a work-study job in the Study Abroad Office, where she learned about the Language and Culture Assistance in Spain Program. Griffin applied for the program and was accepted after graduation.

“My boss told me to research the program to be able to offer it to students,” she explains. “Who could have known the impact it would have — and still has — on my life today!”

Griffin has come a long way since she first arrived in Spain in 2010 with two suitcases, no place to live, and no international friends. “I’m proud of how far I’ve come while living in a foreign country all on my own,” Griffin says. “Now sometimes it takes me an hour to get from one side of town to the other, because so many students or families stop me in the street to have a chat.” 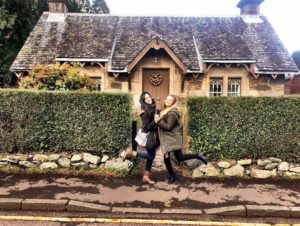 Griffin travels often to other European countries. She is pictured here with a friend in Luss, Scotland.

And while Griffin spends most of her time teaching at both a public school in the mornings and at her private academy in the late afternoons and early evenings, she strives to live by the motto “Eat well. Travel often,” hopping quickly over the nearby Portuguese border or jetting off to virtually any country in Europe. 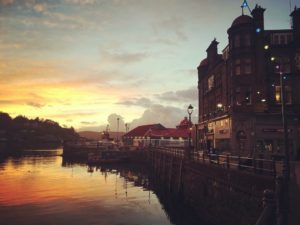 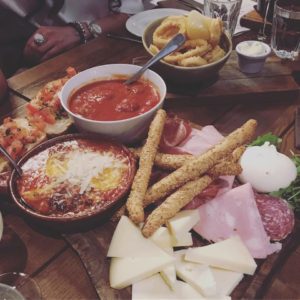 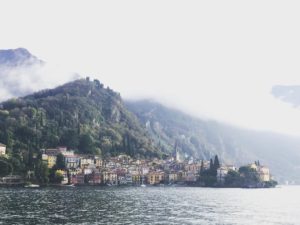 “There are so many cheap flights, and since I always have a three-day weekend, I take advantage of my free time to travel and explore new cultures,” Griffin says, adding that she spent the last two weekends in Italy and Scotland.

And whether she’s traveling or teaching, Griffin keeps in mind the lessons on inclusivity she learned at Westminster, which reflect her favorite motto: “Just because it’s sunny outside doesn’t mean it’s hot.” “It helps me to remember not to stereotype people, things, places, new food, cultures, but to experience everything for myself first hand before I make a conclusion.”