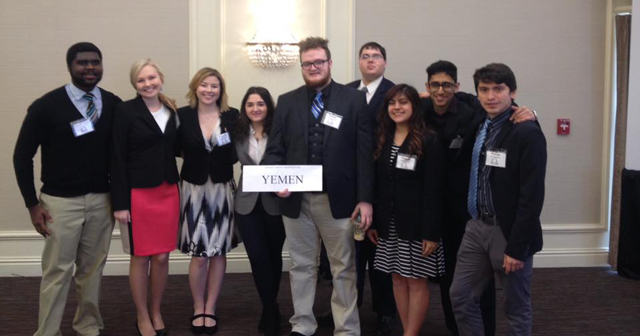 Dr. Kali Wright-Smith, a Westminster political science professor, continued to serve as Model UN instructor and advisor.  The Westminster Model UN team was founded in 1981 by Dr. Linda Pickle, a former professor of German at the college. The program is housed in the Churchill Institute for Global Engagement.

The MMUN was founded in 1962 and is the oldest Model UN conference simulation in the United States. Westminster College has sent students to different Model UN conferences over the years, and its program is considered a model for other institutions.

The Churchill Institute for Global Engagement (founded in 2008) is Westminster College’s one-stop-shop for all things global.  It houses, among many programs and offices, the Green Foundation Lecture series that brought Sir Winston Churchill to campus in 1946, and several award-winning co-curricular programs such as Model UN and the Global Development and Progress Club.

The latter won, in 2016, fourth place nationally in the Peterson Foundation’s non-partisan “Up2Us” campaign for increasing the knowledge of the national debt and the CIGE also won the “Innovation Award in Internationalization” from the Association of International Education Administrators (among 430 domestic and international institutions of higher education) in 2016.