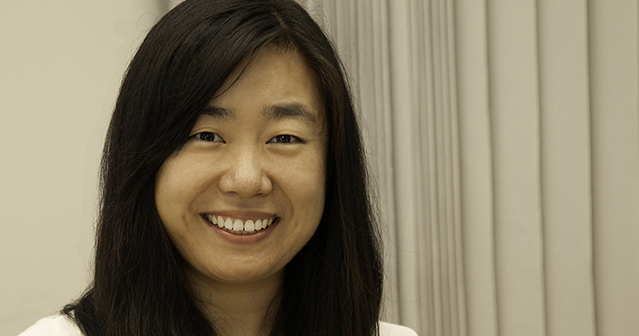 Jia Liu uses creativity and a wealth of scientific know-how to develop technology’s next big thing.

Imagine you’re looking at a microchip. It’s tiny, it’s durable, and it holds enough information to power your entire computer, telling it what to do and exactly how to do it. Now imagine looking at that same microchip — with all of its strength, durability and technological capabilities — and try making it smaller and faster. That’s what Jia Liu ’09 does every day.

“We want to make the chip smaller but not compromise internal performance,” she says. “So there’s a lot of process control. It’s challenging, but I really like that.”

Liu is a process engineer for Lam Research in Silicon Valley. After graduating from Westminster College with a degree in chemistry and physics, she attended the University of Southern California, where she earned her Ph.D. in chemistry in 2014. Her work on nanomaterial synthesis has been published in numerous journals, including Nature Communication, Nano Letter, ACS Nano and Nano Research. With research and experience spanning materials science, inorganic chemistry and engineering, she’s a perfect fit for Lam.

“I really enjoy what I’m doing,” she says. “Overall, I think technology has changed how we live our lives, and to be in this big group and try to make this technology even more powerful, to me it’s very rewarding. It’s hard work but very rewarding.”

It’s creative work, too — more so than one might expect from a job so steeped in science and research. A typical day for Liu starts with organizing data, followed by a meeting with her boss to discuss whatever project they’re working on: what the clients want, what materials to include, what the next step is. Then she heads to the lab to perform experiments.

“You know your final goal, but how you get to your final goal and how you solve all of the challenges, that’s the interesting part of the process,” she says. “You can be creative to reach that goal.”

Liu might have anywhere from one to three projects in the works at any given time. The process is collaborative in terms of having lots of meetings where the engineers talk about challenges with their projects and offer help with others. “But it’s also very independent,” Liu says. “You have your project, and that is your baby.”

Growing up in Inner Mongolia, China, Liu always knew she loved science. She was an exceptional student from an early age, good at critical thinking and problem solving. She attended Cross Nordic United World College in Norway, where she received her International Baccalaureate degree in 2005. After that, she decided to go to Westminster. Although Fulton, Missouri, wasn’t quite the New York City or California images of the United States she’d seen on TV and movies, she says the transition was easier than she expected.

“Although it’s a small campus, Westminster is almost like a model UN,” she says of the College’s diversity. “There are lots of cultures represented there, which is so valuable. You can go into a class and meet people from all different places and learn about different cultures from talking to your classmates.”

Academics, particularly science, were the top priority for Liu during her time at Westminster. She took advantage of the College’s numerous research opportunities, working with Dr. Kent Palmer on the latest FTIR polarization experiment and working on the pH-regulated chemical oscillator experiment with Dr. Glen Frerichs. But she also enjoyed the scope of her liberal arts education and the close-knit community.

“Both academically and socially, Westminster was good preparation for USC,” Liu says. “The transition was easier, I think, because of what I learned there.”

Although she jokes that looking back, she’d tell her younger self to enjoy college a little more instead of always working, she did enjoy her undergraduate years and made friends she still keeps in touch with today.

“Westminster is like a big family,” she says. “All the faculty and staff are extremely supportive and helpful. I keep in touch with friends and professors. Once you’re out of there, it’s still like family. You’re always connected.”

Liu is happy to reflect on her Westminster experience and the foundation it gave her, but her vision now is set on the future and building technologies that will power the next generation of electronics.

“As we all know, the rapid pace of technology has changed the way we live our lives, and with the requests of smaller and faster, modern electronics have transistors with continuously increasing integration density and switching speed,” she says. “However, the scaling-down process will soon reach the limit due to technological barriers in the fabrication processes and limitation in fundamental physics.”

As a result, she says, researchers have been exploring new device structures and semiconducting materials to continue the scaling-down process.

“I want to work on developing the solution to continue to advance our technology,” she adds.