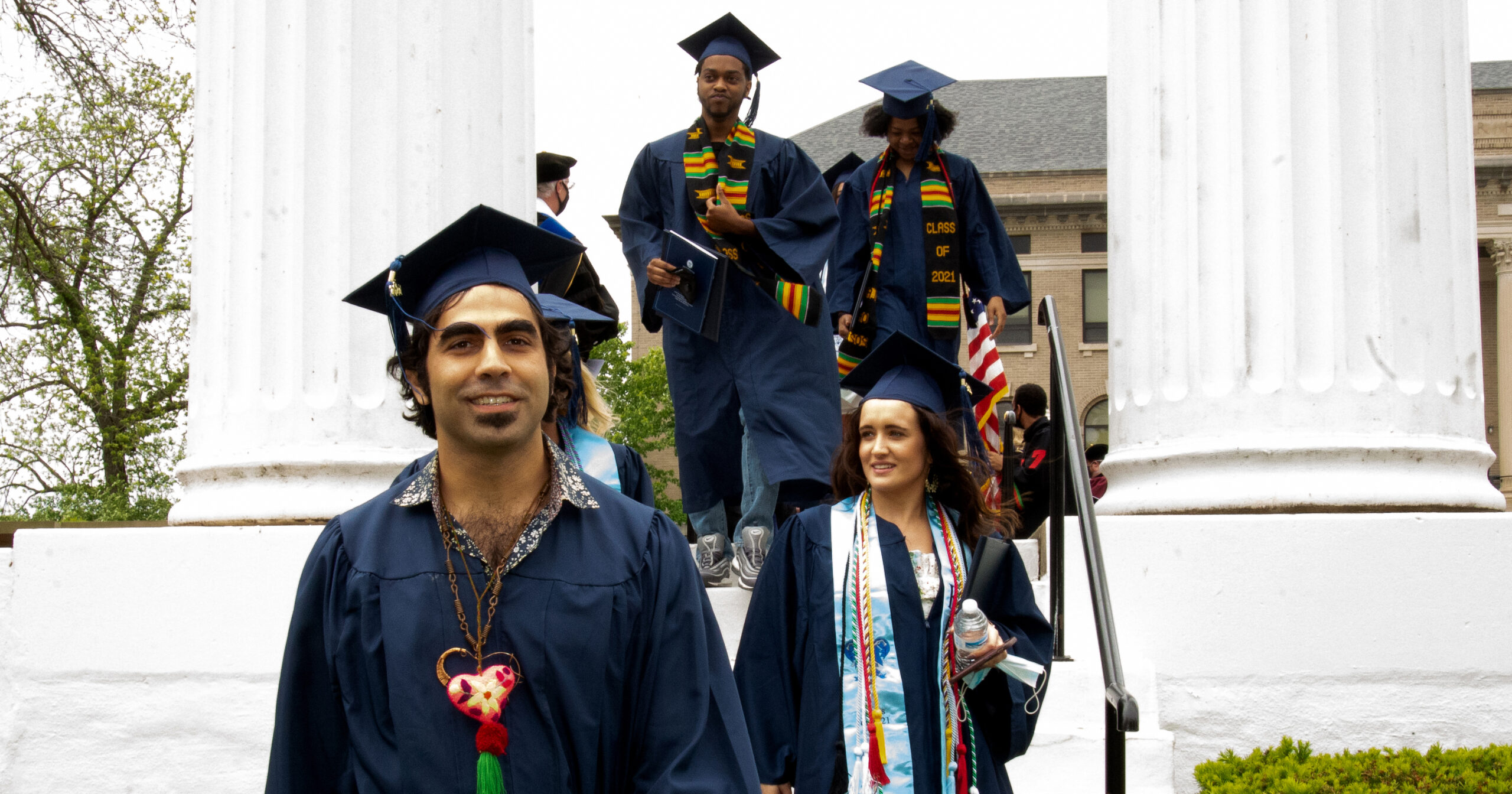 The Class of 2021 at Westminster College celebrated their tenacious ability to roll with the punches  when commencement exercises swiftly moved indoors because of threatening storms on May 8.

The 11 a.m. ceremonies pivoted from the Hill to socially distanced space in Champ Auditorium, with families viewing the event via livestream from the Historic Gymnasium and Coulter Science Center Lecture Hall.

As the day progressed, the rain tapered off, allowing graduates the opportunity to process victoriously through campus and end at the College’s revered Columns Ceremony.

The crowd cheered loudly in both pride and visible relief following a year of pandemic-related restrictions that eventually became second nature to the senior class.

Many of the commencement speakers pointed out that the Class of 2021 demonstrated a knack for resilience this past year.

Dr. David Roebuck, Vice President for Academic Affairs and Dean of Faculty, also welcomed the class with the assurance that the graduates joined the ranks of highly successful graduates who have gone before them since the 1850s. 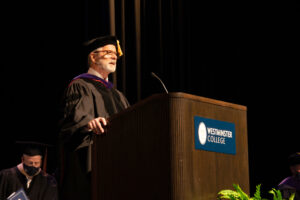 Senior Class President Samantha Henderson of Louisiana, MO, followed Roebuck, emphasizing she did not want her speech to focus on COVID-19. Instead, the Biochemistry and Exercise Science major reminded the Class of 2021 that they should celebrate. 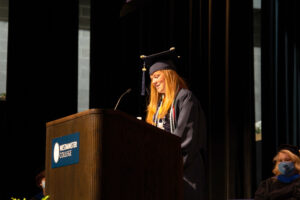 “It wasn’t a perfect four years, but Rome wasn’t built in four years, either,” Henderson said pointedly. “We have the rest of our lives ahead of us now to live, and we have Westminster College to thank for getting us to this moment.” 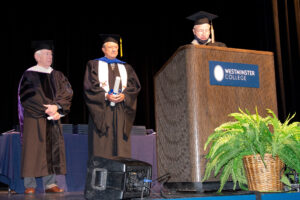 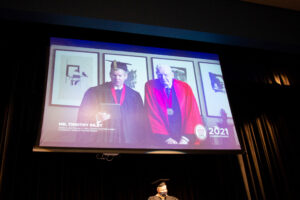 The Chancellor Emeritus and Professor of Higher Education at the University of Arkansas in Fayetteville elicited chuckles from the assembly of approximately 140 graduates in the auditorium as well as faculty members in the balcony. 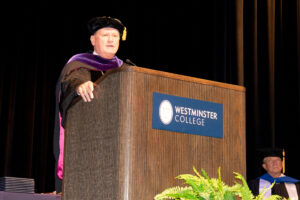 “A part of me wants to tell you that the world is nuts, downright crazy, and to just stay here. … Go back to bed and pull the covers over your head!” said Gearhart, who served as Director of Development and Assistant to the President at Westminster early in his career as well as on the Board of Trustees from 1998 to 2001. “But of course, that is not realistic nor possible. You are going to face a mean world out there, and some folks in your life will really chap at you.”

He ended his speech by reassuring the graduates that they would triumph.

“We live in a time of tremendous concern, trial, and tribulation. History tells us that crises come and go, but the human spirit always prevails,” said Gearhart, who the College named a Distinguished Alumnus in 1992. 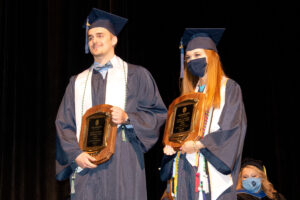 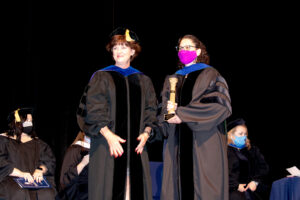 Following closing remarks, the Alma Mater, and Benediction by Rev. Kiva Nice-Webb, the ceremonies closed with Custodian of the Columns Katherine Bloom of Pullman, WA, ’22 ΚΚΓ, delivering the Custodial Address of the Columns Ceremony.

“So as you pass between these majestic columns, you are not abandoning the College but are hastening to take your place in the ranks of her defenders,” she said on the Champ Auditorium stage before the Cabinet, faculty, and graduates processed to the Columns.

Bloom continued with the following: “To you, Westminster commits her future and her honor. Seek wisdom, live uprightly, promote justice, defend freedom, serve God, and live this heritage. As you pass through these pillars, may you take the knowledge and skill you have gained here at Westminster out into the world.”

To watch the complete Commencement 2021 ceremony, visit Westminster’s YouTube page. You also may view photos from the day’s events, including the Alpha Chi initiation ceremony, through Zenfolio.