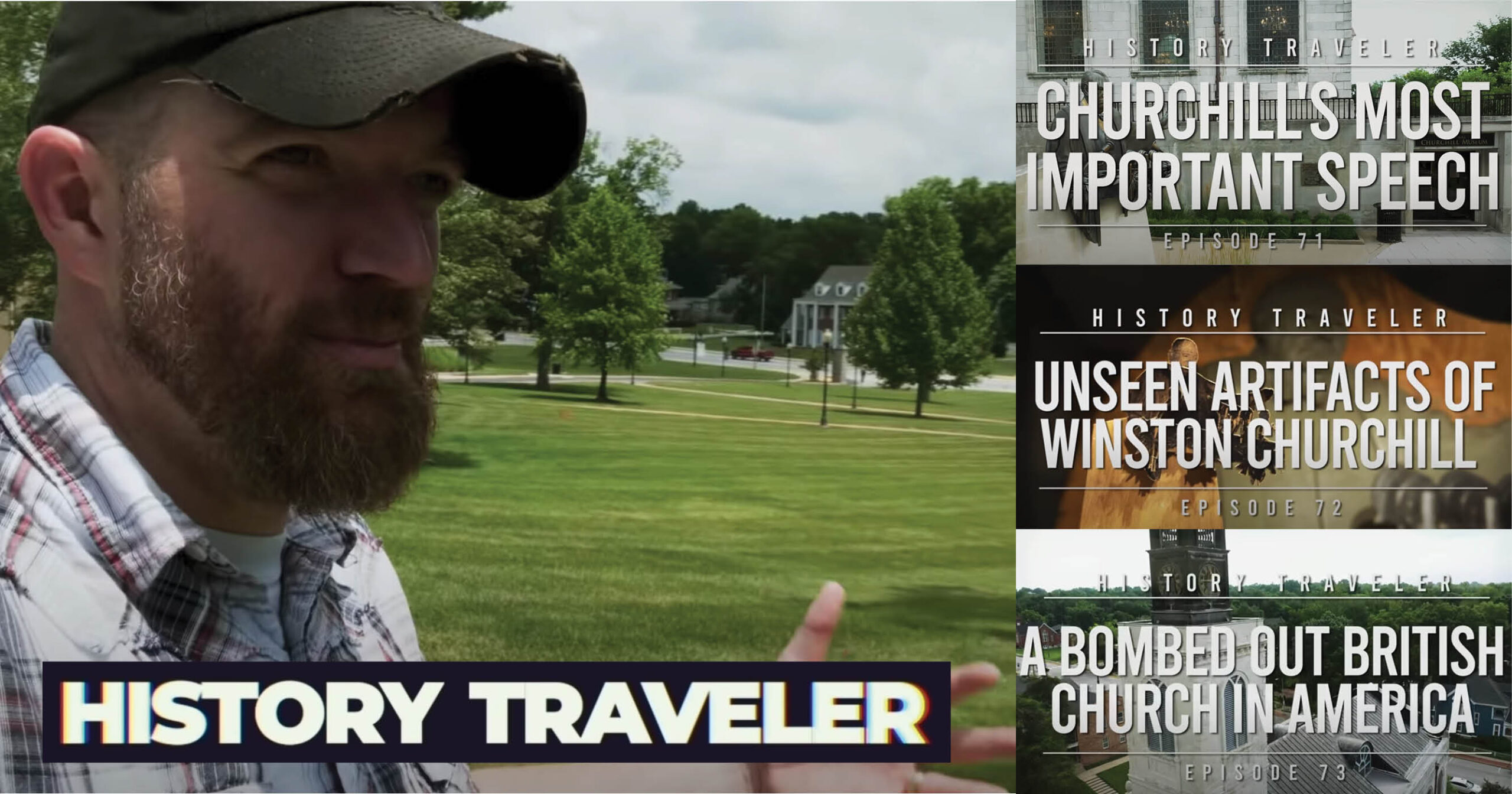 With more than 65,000 subscribers, History Traveler merges the latest in media trends with rich storytelling. The series covers a wide variety of history and geography on site, from scenic but dangerous U.S. highways to actual foxholes in Bastogne, Belgium, to Westminster College, where Winston Churchill delivered his famous “Iron Curtain” speech in 1946.

In Episodes 71 to 73, documentarian J.D. Huitt visited the College on July 3 and moved slowly through campus to give the world a glimpse of both famous and lesser-known treasures at Westminster: Washington West House, where Churchill rested before his speech; an “Unseen Artifacts of Winston Churchill” exhibit at the Museum; the 12th-century steps to the belfry of the Church of St. Mary the Virgin, Aldermanbury; and the press box that is still suspended from the ceiling in Historic Gymnasium.

Timothy Riley, the Sandra L. and Monroe E. Trout Director and Chief Curator of America’s National Churchill Museum, says the documentaries bring Westminster’s extraordinary history to life by connecting the College’s ties to London, Winston Churchill, the Berlin Wall, and some of the most significant geopolitical events of the 20th century.

“History Traveler has shared with a worldwide audience something the Westminster community has long known — our campus, and what happens here, is very special.”

Huitt’s enthusiasm about the College cannot be contained in the video segments, where he encourages people to make quick stop off of I-70 to visit Westminster.

“Right here, just as soon as I stop out of bounds, this is the exact spot where Churchill would have been standing,” Huitt says excitedly at the 15 minute, 42nd second mark of Episode 71 as his camera pans the Historic Gymnasium. “It’s absolutely amazing to be here in this place, in the exact spot where one of the great men of history gave one of the greatest speeches. And it’s all right here, at Westminster College.”

Huitt, who in addition to producing the series is a high school history teacher in Missouri, says a number of people from as far away as England have sent him messages concerning the three-part series.

“A sizeable number of viewers come from overseas, so there were quite a few from Britain who were surprised to see one of their churches over here, and others expressed that they are familiar with the location where the church used to sit and appreciated being able to see what became of it,” he reflects. “Others said they’d never heard of St. Mary the Virgin, Aldermanbury, before or the story behind it, but now that they have, it’s a destination they would like to see for themselves.”

View Episodes 71, 72, and 73 in their entirety, and make plans to visit Westminster College sometime in the future. While the Museum remains temporarily closed due to preservation and construction on and around St. Mary the Virgin, Aldermanbury, you can continue to visit their website virtually to view exhibits and a variety of lectures.