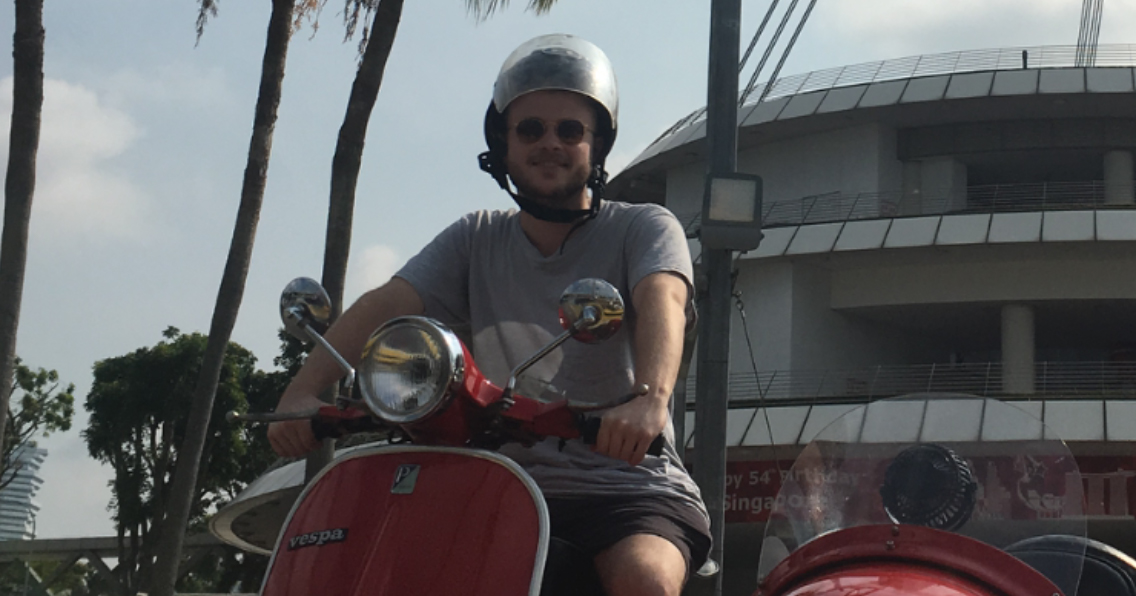 What led you to your majors?

I always figured I would get a business degree, because it’s very practical, and I am interested in interpersonal communications, so the aspect of business I always wanted to go into was marketing and the people side of things. I realized that languages were really cool, so I picked up a Spanish major, because it also would be very useful in the business world.

What brought you to Westminster?

I visited Westminster on a whim. I knew about it because I went to a summer camp at William Woods University, and did some field trips at the Churchill Museum. I knew about the College, but at the time had never really considered it seriously because it is so close to my hometown, and I always thought I had wanted to go pretty far away. Then I visited, and I really liked the campus. It was presented very well to me. It was the best financial package that I received, which also helped me make my decision. One of the other things that drew me to Westminster was the international program here. I obviously only ended up 20 minutes away from home, but I am totally okay with that because I have made a lot of friends here that are from abroad or from other states.

What are you involved in on campus?

What is something that stands out to you about the Westminster experience and education as a whole?

Like I mentioned earlier,  the international aspect of the college stands out to me a lot, and when I say international, I think simultaneously the fact that there are so many students here that are from abroad but also from all over the country, even though we are such a small school in the middle of the United States. The fact that we have a Christopher Wren Church on campus or in the United States at all is insane to me and for anyone who appreciates architecture. That church helps make our campus as beautiful and historic as it is. Another thing about Westminster that stands out to me is that it is so small and very communal. It is similar to being at high school, except for more laid back, because I know everyone. This isn’t a bad thing, though. As a senior, it’s cool to still be friends with someone from freshman year or have classes with people who I don’t really get to see that often. I really enjoy the amount of autonomy and freedom that students have and that students are able to be influential on campus. This might be the case at other colleges as well, but at Westminster it’s really easy to not only get involved, but to make differences and see how those differences continue to affect the school after you graduate.

How has Westminster given you a purpose?

Westminster has given me a lot of independence and freedom in general. For instance, prior to coming to Westminster, it was not my plan to be a Spanish major. I just thought that was going to be a practical thing that I could add to my business degree. But I ended up really discovering a passion for languages. Professor Enrique Salas-Durazo is incredible in terms of what he teaches, and he is one of the reasons I have found my hidden passion for language. Westminster has allowed me to have the freedom to decide what I want to do while at the same time helping me discover my goals. I came into school not really knowing what I wanted to do with my life, so Westminster has given passion for things I did not really know I had a passion for, which is really what college should be all about.

What does transitioning from a learner to a leader mean to you?

That is something I do quite often. For example, I am not a math-oriented person at all, but I like to learn, and I am a hard worker, which helps me in terms of leadership. I think that it is great how people at Westminster acknowledge that there are multiple intelligences and at the same realize and accept that different people are good at different things. I am much more linguistically, historically and culturally oriented, so those classes come easier to me. In the classes where I don’t excel as much, I am able to use my learning and leadership abilities to work with professors and other students to figure everything out.

What are your career aspirations after college?

I am going to answer with the classic “I have no idea,” but I do have a goal in mind after a study abroad trip to Spain this last summer. I just absolutely loved it there, and I wanted to come back to Missouri and see my family, but now that I’ve done that, I would really like to go back to Spain for a while. The government there has a program where students who have recently graduated can be English teachers. Through that program, I would get a Visa and a monthly stipend, which wouldn’t be a lot but just enough to live there and figure out what I want to do. When I returned from Spain this last summer, I interned at a distillery, which is an industry that I have always been peripherally fascinated by but never actively engaged in until this summer. This is a company I would be able to reconnect with and see if I could work for them again. It would be a great place to start because they have a lot of connections to Spain and other places abroad.

What are some fun facts about yourself?

I am a former President of Phi Delta Theta fraternity, I have been to five continents and I really like the color green.