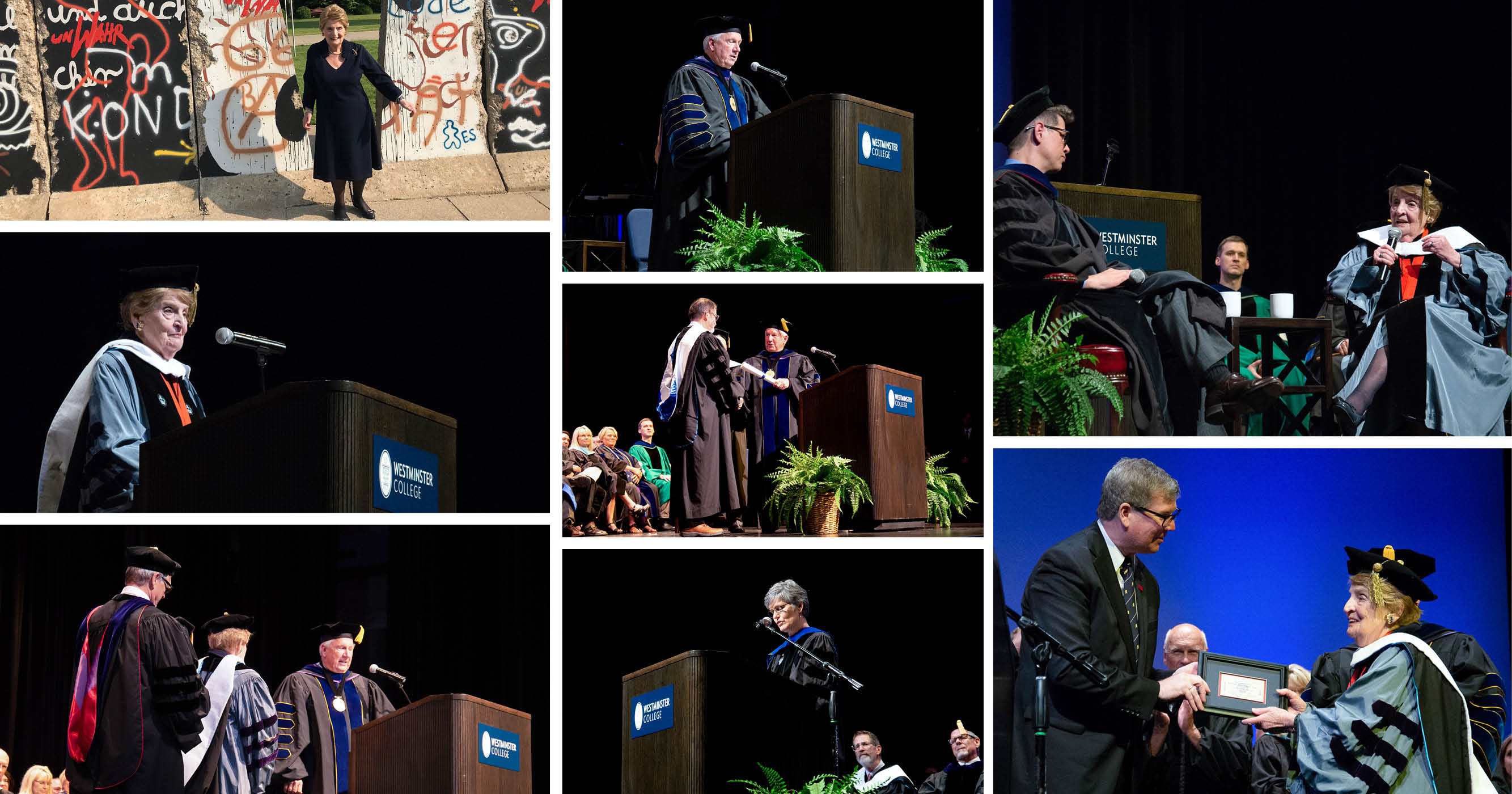 Dr. Madeleine K. Albright, the first female U.S. Secretary of State, capped off Westminster College’s 14th annual two-day Hancock Symposium with one of the most well-received lectures ever delivered at the College.

The former Secretary of State and U.N. Ambassador — who at one time was the highest-ranking woman in the U.S. Government — delivered the 59th John Findley Green Foundation Lecture before a near-capacity crowd of about 1,100 at 1:30 p.m. on Sept. 19 in Champ Auditorium.

Albright’s lecture titled “For All Who Cherish Freedom: The Future of Democracy” generated more than 750 headlines and reached more than 150 million readers, viewers and listeners of traditional media throughout North America and as far away as Eastern Europe.

The reach of the lecture is the result not only of who Albright is but of what she pointedly said.

Perched on a stool behind the podium, Albright’s presence was anything but diminutive as she declared that democracy worldwide “appears to be in retreat.” She also issued a stern warning against the United States and other countries from becoming isolationistic while subsequently unraveling special relationships formed after World War II.

“I am no Churchill, but today, I want to issue a call for action,” Albright said in a reference to Green Lecturer and Former British Prime Minister Winston S. Churchill’s “Sinews of Peace” speech delivered at Westminster on March 5, 1946. “I want to urge everyone, especially the students, to treat this as another clarifying moment in our history.”

A Democrat who served as Secretary of State under Former President Bill Clinton, Albright praised Former President Ronald Reagan, Former President George H.W. Bush and other conservatives for their support of NATO and for fighting fascism and nationalism, which she said are on the rise. Albright added that these trends threaten to break ties among democratic nations and will potentially wreak chaos within those countries’ governments.

Her comments mirrored Churchill’s sober message that warned of an “iron curtain” descending across Europe in the form of an encroaching Communist threat.

Albright’s lecture was met with a standing ovation.

The deafening applause followed various other moments during the lecture when the audience spontaneously clapped or laughed uproariously at Albright’s wry comments. Early in her speech, the former diplomat grabbed everyone’s attention when she described a fondness for Missouri after time spent early in her career as a Waynesville, MO, resident and reporter for The Rolla Daily News.

“I wrote obituaries and articles for the society page, reported on an occasional sports story and even interviewed people who had seen a UFO,” Albright recalled.

Earlier in the day, Albright was inducted into the Association of Churchill Fellows of America’s National Churchill Museum, receiving a medallion from The Honorable Edwina Sandys, M.B.E., granddaughter of Clementine and Winston S. Churchill and internationally acclaimed artist of the Breakthrough sculpture on Westminster’s campus.

The “Breakthrough”-themed Hancock Symposium 2019, which in recent years has concluded with the John Findley Green Foundation Lecture, was organized by a committee of faculty members and directed by Dr. Carolyn Perry, Director for the Center for Teaching and Learning and Professor of English, and headed by Dr. Jeremy Brooke Straughn, Associate Professor and Director of Transnational Studies and Director and Assistant Dean of the Churchill Institute for Global Engagement.

Perry says she thinks students, in particular, benefited from listening to Albright’s speech and other Hancock Symposium speakers because the two-day event is designed specifically for them. “It’s designed to engage and challenge them from beginning to end, and the more they are not simply drawn to our speakers and topics but also pushed out of their comfort zone, the better,” she says.

Straughn, who conducted a question-and-answer session with Albright following the lecture, says Albright not only delivered a spectacular address while demonstrating strength through her commanding presence, but the former diplomat treated students and all others she encountered with fairness and respect.

“She was extremely gracious and spoke with authority and brevity,” he says.