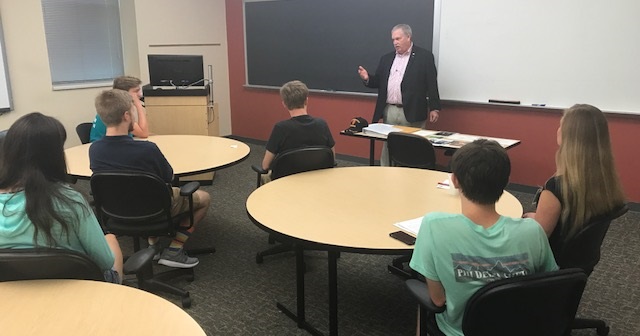 During the four-day, three-night program, students participated in hands-on problem solving and national security simulations to consider the problems facing our world today.

“It was a great week for the WINS students,” says Dr. Kurt Jefferson, Assistant Dean for Global Initiatives and Director of the Churchill Institute for Global Engagement, who presented a session titled “Islam and the Future of Global Politics.” Other sessions covered such diverse security topics as money laundering, torture, intelligence analysis, and Winston Churchill’s influence during the Cold War.

Of particular interest this year was a visit by Westminster alumnus and trustee Brock Ayers ’82 (ΔΤΔ), Vice President of Investments at Wells Fargo Advisors. Seen standing in the photo above, Ayers served as a major in the U.S. Army and on the National Security Council staff under Presidents Reagan and George H. W. Bush from 1988 to 1990.

Ayers gave copies of a news briefing from the National Security Council staff and letters from Presidents Reagan and Bush to the WINS students as a reminder of his time working for both presidents.

More information on the Westminster Institute for National Security can be found here.