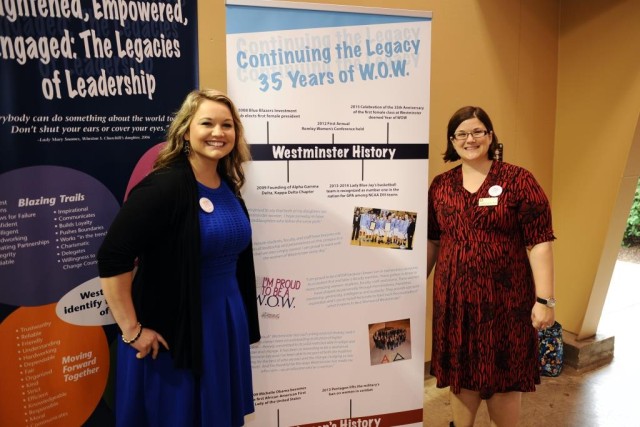 Two members of the Westminster College community will receive the 2016 Remley Women’s Awards at the “Celebrating Westminster Women Luncheon” at noon on Saturday, April 23, in the Mueller Student Center during Alumni Weekend.

“Cinnamon Brown and Kasi Lacey will be recognized for their continued support of women on our campus,” says Betsy Humphreys, ’83, from St. Louis, a member of the first women’s graduating class and Alumni Council member on the awards committee. “These two women epitomize the legacy of Dr. Audrey Remley, who served as advocate and mentor to the first classes of women who passed through The Columns.  Cinnamon and Kasi continued their legacy by organizing and executing the 35th anniversary of Westminster Women activities throughout 2015, the ongoing management of the annual Westminster Women’s Leadership Conference as well as serving as the advisors for the Remley interns.

The Remley Women’s Award celebrates women who have shown exceptional passion and support for the women of Westminster College, emulating the spirit of the award’s name sake, Dr. Audrey Remley.   Dr. Remley was Westminster’s first full women professor and welcomed the first women students on campus in 1979.

A committee consisting of a faculty/advisor/representative from the Remley Center, lead student intern within the Remley Center, designated member of the Alumni Council and Director of Alumni Engagement select the recipients from women who have been nominated.

“Cinnamon and Kasi have transformed Remley Women’s Center and have planted seeds that will create a revolution of positive change on Westminster’s campus,” says Lianna Keller, a senior from Ballwin, MO and lead student intern on the award committee.  “As our leaders, they have allowed the Remley interns to be a part of spreading education, support and healing to our fellow students.  As a senior, I am confident that they will continue to influence

Dr. Cinnamon Brown came to Westminster in the fall of 2009, after completing her doctorate in history from the University of Tennessee.  She is one of the most active and recognized faculty members on campus and took the lead in organizing the 35th anniversary celebration of Women of Westminster last year.

Her research focuses on early Louisiana history and she is drawn to the experiences of women and African Americans which inspired her favorite course, “Scandalous Women in American History.”

Dr. Brown’s awards include the Remley Women’s Center Award for Exceptional Faculty, Alpha Chi’s Most Influential Professor and Outstanding Junior Faculty Member in the Humanities.  She was nationally recognized as a recipient of Kappa Alpha Theta’s Top Ten Outstanding Faculty Members of the Year.

Dr. Lacey received her counseling psychology doctoral degree from Texas Tech University and completed her pre-doctoral internship at the University of Missouri-Columbia.  She is a licensed psychologist in the state of Missouri and has been working at Westminster since the fall of 2011.

Dr. Lacey was appointed Board President of CARD-V in Fulton and received the Faculty Advisor of the Year Award from the Order of Omega Greek Awards.  She has also received the Westminster Faculty of the Year Award from Phi Delta Theta in 2013 and 2014, the Living the Mission Barney Forsythe Award in 2015 and the Buschman Award for Inspiring Service along with Brown in 2015.