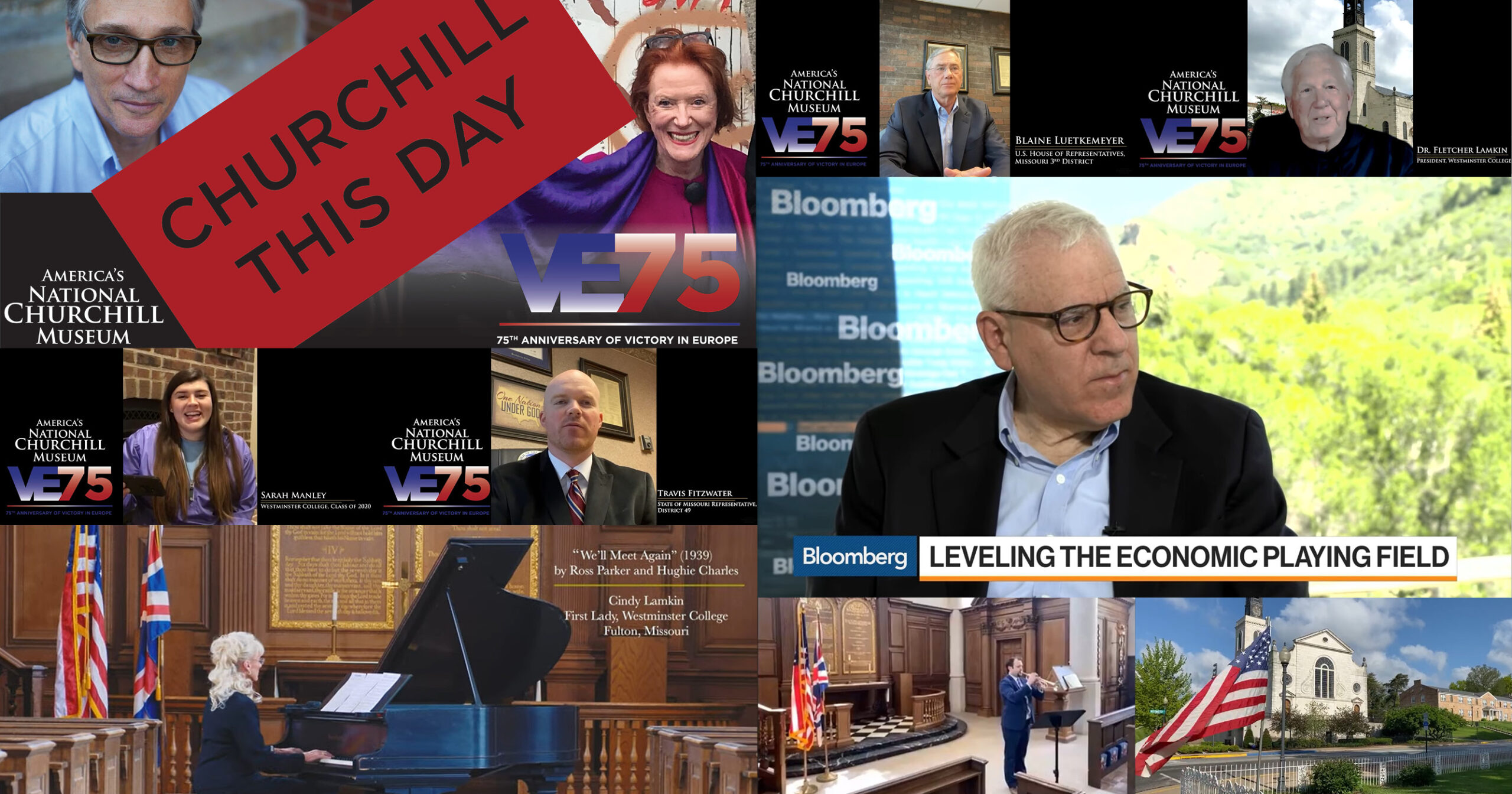 America’s National Churchill Museum (ANCM) on the Westminster College campus shined on the world stage on May 8: in a David Rubenstein Bloomberg Network interview and throughout a variety of Victory in Europe (VE Day) celebrations.

Westminster and ANCM on Bloomberg

Erik Schatzker of Bloomberg’s “Balance of Power” interviewed Churchill Fellow David Rubenstein, Co-Founder and Co-Executive Chair of the Carlyle Group, about remarks made last year in an address at Westminster.

Schatzker said, “You recently spoke at Westminster College in Missouri, and in your remarks, you shared your concerns about the federal debt, about the viability of Social Security, about gun-related deaths, about obesity …”

Rubenstein explained that he made his comments during ANCM’s 50th anniversary celebration, pointing out that Westminster is the location where Winston Churchill delivered his famous “Iron Curtain” speech in 1946. Watch the segment in its entirety here.

On the same day, ANCM hosted a number of virtual events associated with the 75th anniversary of Victory in Europe (VE) Day despite the Museum’s temporary physical closure to the public for COVID-19.

The VE Day virtual celebrations took place in honor of the “special relationship” — a concept often promoted by Churchill — between Great Britain and the United States.

Trumpet Salute and Moment of Silence

The events began solemnly at 11 a.m. with a trumpet salute in the relatively empty sanctuary of St. Mary the Virgin, Aldermanbury. David Myers of Columbia, MO, played “The Last Post,” which is a piece commonly played in British military funerals and ceremonies to commemorate those killed in war.

Following the trumpet call, ANCM asked Americans to pause for one minute of silence to honor those who fought during World War II and for today’s healthcare heroes who are fighting to save lives during the COVID-19 pandemic.

A more jovial commemoration of the end of WWII followed with a special webcast at noon that was facilitated by Timothy Riley, the Sandra L. and Monroe E. Trout Director and Chief Curator of ANCM.

Sandys and Daniel discussed their famous grandfathers’ leadership roles during WWII and on VE Day.

Sandys’ well-known Breakthrough sculpture composed of eight sections of the Berlin Wall sits adjacent to ANCM. The acclaimed artist, author and former columnist for the Sunday Telegraph has visited Fulton many times throughout the years.

Clifton Truman Daniel is the eldest grandson of Harry Truman and First Lady Bess Truman of Independence, MO. He is the son of the late best-selling mystery writer Margaret Truman and E. Clifton Daniel Jr., former managing editor of the New York Times.

Most recently, the younger Daniel oversaw public relations for Truman College in Chicago. He also worked as a feature writer and editor for the Morning Star and Sunday Star-News in Wilmington, NC. Daniel is the honorary chairman of the board of trustees of the Harry Truman Institute in Independence, MO.

After the webcast, the bells of St. Mary the Virgin, Aldermanbury, pealed at 3 p.m. in “Victory” to pay tribute  to the VE Day anniversary and salute the American soldiers and other Allied troops who helped liberate Europe during WWII.

First Lady Cindy Lamkin performed a special piano solo in the empty sanctuary of St. Mary the Virgin, Aldermanbury, in a salute to all essential workers who remain at their posts during the COVID-19 crisis. Her performance of “We’ll Meet Again,” a popular WWII anthem, also poignantly celebrated the Class of 2020, whose graduation was postponed to Aug. 8 because of the pandemic.