Get to Know the 2018 Churchill Fellows 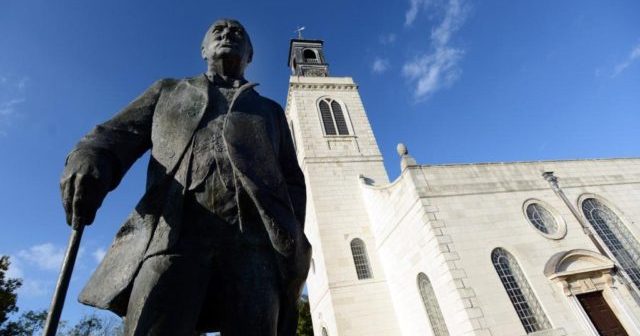 Ron Dermer is an American-born Israeli diplomat, who has served as the Israeli Ambassador to the United States since October 2013. He was born and raised in Miami Beach, Florida, but moved to Israel in 1996.

He previously served as Israel’s economic envoy to the United States from 2005 to 2008, a position requiring him to give up his American citizenship. He is among the most influential advisors to Israeli Prime Minister Benjamin Netanyahu.

Dermer is the younger son of Yaffa Rosenthal, who was born in Mandatory Palestine and moved to Florida with her parents shortly after Israel won its independence, and Jay Dermer, a trial lawyer from New York City, who became mayor of Miami Beach in the late 1960s.

Dermer went to a Jewish day school, and in 1984, two weeks before his bar mitzvah, his father died of a heart attack. His brother, David Dermer, a Democrat like his father, also served as mayor of Miami Beach.

Dermer earned his Bachelor of Science degree in Finance and Management from the Wharton School of Business at the University of Pennsylvania, and a degree in Philosophy, Politics, and Economics (PPE) from Oxford University.

In 1995, while still at Oxford, he helped manage Natan Sharansky’s Yisrael b’Aliyah 1996 Knesset election campaign. The following year, Dermer moved to Israel, and in 1997, he began the process of becoming an Israeli citizen.

For nearly three years (2001-2004) Dermer wrote a column “The Numbers Game” for The Jerusalem Post. And, in 2004, he co-authored with Sharansky the best-selling book, The Case for Democracy: The Power of Freedom to Overcome Tyranny and Terror, which has been translated into 10 languages.

In 2005, while Netanyahu served as Finance Minister under Ariel Sharon, Dermer was appointed an economic envoy at the Israeli embassy in Washington D.C., a post for which he had to give up his American citizenship.

In 2008, after his return to Israel, he served as an adviser to Netanyahu, who became Israel’s prime minister in April 2009. Today, Dermer is considered Netanyahu’s closest adviser and strategic consultant.

Dermer met his wife Rhoda Pagano, a Yale Law School graduate, in Jerusalem when she was clerking for Aharon Barak, then Chief Justice of the Israeli Supreme Court. The couple have five children and live in Jerusalem.

Sam Fox is a national business leader, philanthropist, a civic leader, former United States Ambassador to Belgium, and supporter of the National Churchill Museum and its educational mission.

Born in Desloge, Missouri, just south of St. Louis, to Ukrainian Jewish immigrant parents, Fox worked hard as a teenager in Illinois canning peas and corn and selling Fuller brushes to earn enough money to attend college. He enrolled in 1947 at Washington University in St. Louis, where he graduated with honors, earning a Bachelor of Science and Business Administration degree in 1951.

After graduation, Fox joined his brother’s Madison, Illinois, manufacturing company, Fox Industries, which made powder for the chemical industry, operated a 50-acre industrial park and warehousing operation. During the Korean War (1950-53), Fox also served in the U.S. Naval Reserve.

In 1975 he started his own company, Clayton-based Harbour Group, a highly successful operating company that builds and acquires businesses, many in the manufacturing sector.

Fox served as chairman and CEO of Harbour Group until 2007, when he was appointed by President George W. Bush to serve as the U.S. Ambassador to Belgium. He held that position until January 2009. In 2012, Fox became only the third American to receive The Grand Cross of the Order of the Crown, Belgium’s highest award for public service, presented to him at the behest of King Albert II.

Since its inception, the Harbour Group has acquired and developed more than 199 companies in 42 industries with one focus in mind: to build great businesses.

He and his wife also have been among St. Louis’s leading philanthropists, actively supporting the St. Louis Variety Club, Washington University, where he established the Sam Fox School of Design & Visual Arts, and the Sam and Marilyn Fox Scholarship through the Olin School of Business. He also serves as Director Emeritus at Barnes-Jewish Hospital, where the Fox family funds pancreatic cancer research.

Outside of St. Louis, Fox has served on the boards of the Horatio Alger Association of Distinguished Americans, based in Alexandria, Virginia, and The Washington Center, the largest independent, nonprofit academic internship program in the United States.

Fox has also received numerous other honors and awards, including the Woodrow Wilson Award for Corporate Citizenship, the Marco Polo Award from the People’s Republic of China, the Thomas Jefferson Award from the Missouri Historical Society, and the Sword of Ignatius Loyola Award from Saint Louis University.

Neal F. Perryman is a Westminster College alumnus (B.A./Political Science, 1988), and a member of the Lewis-Rice law firm in St. Louis, where he focuses his practice on labor and employment law, but regularly practices in the areas of ERISA litigation, appellate practice, complex commercial litigation, education law, and municipal law.

Perryman defends employers and management in personnel-related disputes before state and federal courts and administrative agencies.

He also provides counsel to clients on compliance with federal and state employment issues and other labor-related matters, including union contract negotiations. Additionally, Perryman represents clients in other types of complex civil litigation matters and has successfully tried cases in several jurisdictions.

In 2008, as lead trial counsel, he gained one of the first defense jury verdicts in Missouri under the new lower causation standard for Missouri Human Rights Act cases. He also has successfully represented employers and ERISA plans in class-action suits, including a recent summary judgment for an employer-sponsored plan in a cash-balance ERISA class action case.

In 2014, Neal won an appeal in a Title IX case of national significance, having represented the defendant-university as lead counsel in both district court and on appeal.

His commitment to continuing education is reflected in his reputation as an expert in his field. He frequently speaks on the topics of labor relations and employment law, among other topics, and he contributes to various handbooks, newsletters, and journals.

As a well-respected attorney, Neal is a member of the firm’s Management and Recruiting Committees, and he has been selected by peer attorneys for inclusion in The Best Lawyers in America® 2013-2018 and Missouri & Kansas Super Lawyers® 2008 and 2010-2017.

Additionally, he has been among the Top 50 St. Louis area Super Lawyers, and the St. Louis Business Journal named him among the “40 Under 40” Class of 2006. Neal is a fellow in the Trial Lawyer Honorary Society of the Litigation Counsel of America.

Perryman is a strong believer in giving back to the community and has served as an officer or board member for numerous non-profits, including the Great Rivers Greenway District, the St. Louis Metropolitan Zoological Park Advisory Board, St. Louis-Nanjing Sister Cities Committee, the Board of Visitors, Southern Illinois University School of Law, and the St. Raphael the Archangel Parish School Board.

At the age of 97, Harris was recently presented with the Knight of the French Legion of Honor medal, an award created by Napoleon in 1802. Today, it is the highest national decoration of the French Republic.

The medal was presented to Harris by Guillaume Lacroix, consulate general of France in Chicago, on behalf of the president of the French Republic, for Harris’s service during WWII as a bomber pilot in the U.S. Army Air Corps’ Eighth Air Force, 95th Bomber Group, based in Horham, Suffolk, England.

He was honored for leading a squad of 12 B-17s to deliver cannons to the town of Footman-Lilas, where French freedom fighters and farmers used the cargo to liberate the first major city in France. Operation Cadillac helped turn the tide of the war for France, and Paris was soon liberated from the Nazis.

Harris flew 33 combat missions with the 8th Air Force, all in the European Theater of Operations. A third of his missions involved air strikes over France.

Over the years, Harris and his wife, Bridgette, donated millions of dollars to benefit the arts, education and healthcare in metro Detroit, including the Cranbrook Garden Club, Oakland Family Services, the Detroit Symphony Orchestra, the Detroit Institute of Art, the Boys and Girls Clubs of Southeastern Michigan, and other organizations.

They also contributed to Wayne State University, where Harris attended college, and where today the university’s recreation and fitness center bears his name.

Last June, Harris donated $20 million to facilitate cancer care and research as part of a $40 million package to support the Henry Ford Health System. Harris’ donation, in honor of his wife, Bridgette, who died in 2016 following a two-year battle with pancreatic cancer, will help fund the $155 million Brigitte Harris Cancer Pavilion, a six-story outpatient cancer center.

The pavilion, which is expected to open in 2019, will feature special gathering places for patient and caregiver support groups, yoga classes, music and art therapy, a rooftop and third-floor garden, and a skywalk to connect it to 805-bed Henry Ford Hospital in Detroit’s New Center neighborhood.

William Clark Durant III is a dedicated educator and a supporter of the National Churchill Museum.

Durant is well-known throughout Michigan, especially in his hometown of Detroit, where he serves as President of the New Common School Foundation. He is a co-founder of the Cornerstone Schools. The schools serve more than 3,400 students, with plans to reach 6,000 students. He also is a co-founder of the Arnold Palmer Turning Point Invitational, which benefits Cornerstone Schools in Detroit.

He is a former president of the Michigan State Board of Education (1994-1999) and currently serves on the Coalition for the Future of All Detroit School Children.

Durant attended Tulane University in New Orleans and graduated in 1971 as an economics major. While in college, he joined the Reserve Officers’ Training Corps (ROTC) and graduated as a Second Lieutenant in the U.S. Army Transportation Corps. He served on active duty at Fort Eustis, Virginia, then went into the Reserves and was honorably discharged as a Captain.

After leaving the military in 1971, Durant served as the assistant to the president of Hillsdale College and then as a Vice President of the college in 1972-1973.

He also co-founded Imprimis, a monthly publication of ideas that now reaches more than 3.7 million readers.

Durant spent the first six years of his legal career defending people who could not afford a lawyer in a variety of civil and criminal matters.

In 1983, he was appointed by then-Secretary of Transportation Elizabeth Dole as the bankruptcy trustee for the Ann Arbor Railroad, a state-owned, state-subsidized railroad with approximately $100 million in debt and claims. He served as a trustee from 1983 to 1988, turning the railroad into a profitable private-sector enterprise.

In 1984, Durant was nominated by President Ronald Reagan and confirmed by the U.S. Senate to serve on the board of the Legal Services Corporation, which he chaired from 1984 to 1988.

From 1997 to 2001, Durant was Director of the Private Management Group at Munder Capital Management, an investment firm in Bloomfield Hills, Michigan. In 2001 he became the President of the New Common School Foundation in order to help urban children receive an excellent education.

Throughout his career, Durant also has served on the boards of University of Detroit Jesuit High School, University of Michigan’s Center for Theoretical Physics, Excellent Schools Detroit, the Michigan Chamber of Commerce, the PGA’s First Tee program, and the American Chesterton Society Board.

Married for 44 years, he and his wife, Susan, have four children and five grandchildren.