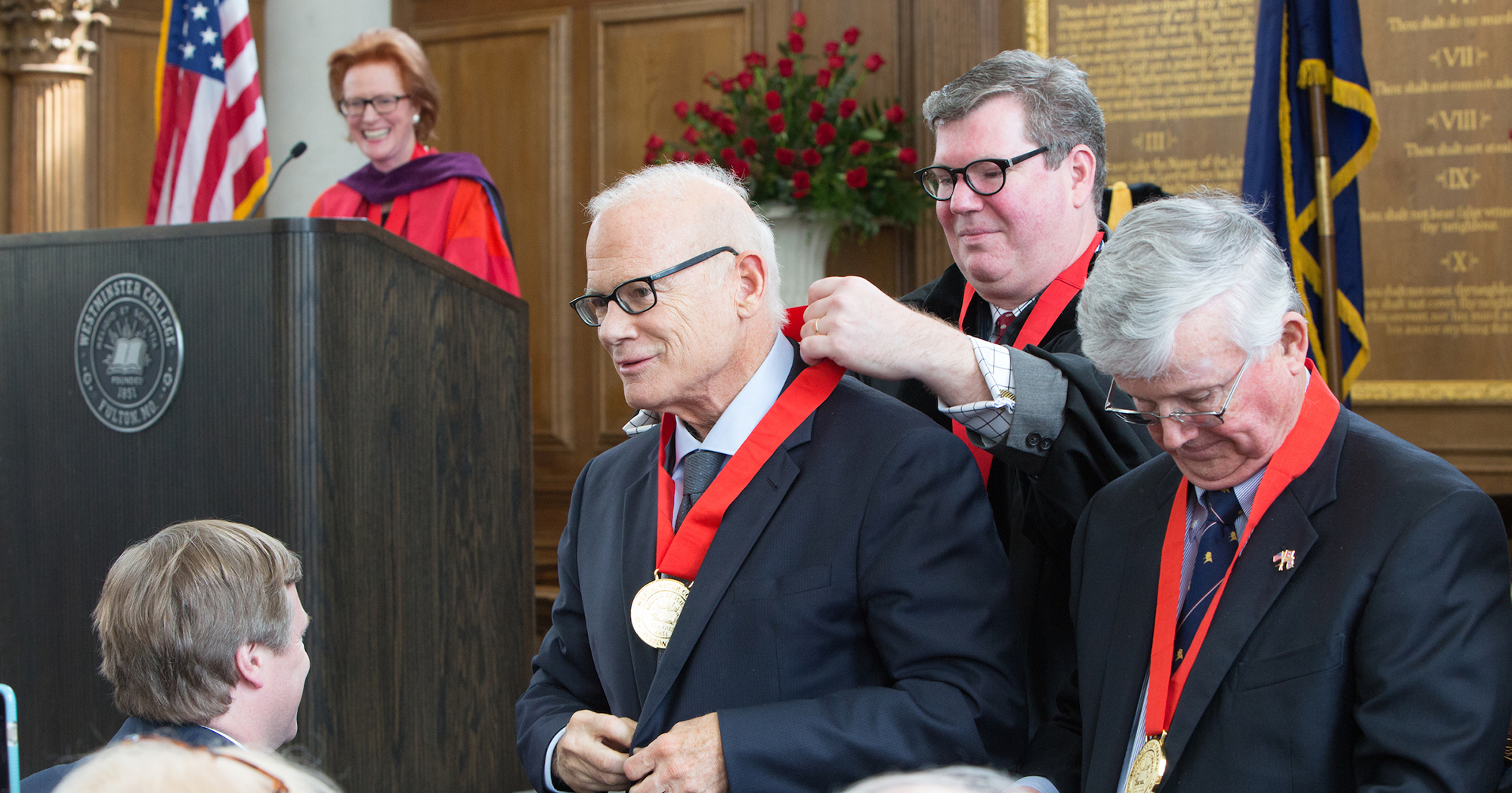 William “Bill” Roedy, center, was named a Churchill Fellow on April 1, 2017, for his long-time support of America’s National Churchill Museum on the campus of Westminster College, where he also delivered the 2011 John Findley Green Foundation Lecture.

“He might be the most interesting man in the world,” said Mike Fries, CEO and Vice Chairman of Liberty Global, an international television and broadband company. “He’s commanded nuclear silos in the Cold War, was friends with Mandela, and partied with Bono.”

Roedy is a good friend and long-time supporter of Westminster College and America’s National Churchill Museum.

The annual award is bestowed upon a stand-out West Point graduate whose character, distinguished service, and stature draw wholesome comparison to the qualities for which West Point strives in keeping with its motto: “Duty, Honor, Country.” The award will be presented in a ceremony at West Point (date to be determined).

“We are very happy for Bill and proud to call him a friend and Fellow,” said Timothy Riley, Sandra L. and Monroe E. Trout Director and Chief Curator and Churchill Fellow, America’s National Churchill Museum. “In addition to his service to Westminster College and America’s National Churchill Museum here, Bill has pursued a lifetime of global service in both the private and public sectors, and he has dedicated his life to uniting cultures, freedom for all, and improving the well-being of all people here and around the globe.”

Upon graduation from West Point in 1970, Second Lieutenant Roedy qualified as an Airborne Ranger and volunteered for duty in Vietnam, where he spent a year in combat operations along the Demilitarized Zone. There, he earned the Bronze Star, Air Medal, and Vietnamese Cross of Gallantry (with Silver Star).

He later commanded three nuclear missile bases in Italy as part of NATO during the Cold War, which many historians agree began as a result of former British Prime Minister Sir Winston Churchill’s “Iron Curtain” speech  in March 1946 at Westminster College.

After his stint in the military, Roedy graduated from Harvard Business School and then embarked on a 33-year career in media. He joined HBO in 1979, as part of a new television cable revolution, and rose to vice president, overseeing offices in Los Angeles, and Philadelphia, negotiating distribution and marketing partnerships, and launching HBO across the United States. He was later honored as a Cable TV Pioneer.

Moving to London in 1989, he led the start-up of MTV Europe, bringing a new form of music television and video to youth and contemporary adult viewers in Western, Central, and Eastern Europe. “Winston Churchill predicted the beginning of the Cold War, and Bill Roedy helped to usher in its end by broadcasting behind the Iron Curtain,” said Riley.

Over the next 22 years, he built from scratch a global operation of 200 channels and 20 brands (including MTV, Nickelodeon, and Comedy Central) in 200 countries, reaching an audience of approximately 2 billion people. His strategy focused on creative, relentless distribution, ground-breaking content that was reflective and respectful of local cultures, and social responsibility, which was highlighted by the largest multi-media initiative to fight the global pandemic of HIV/AIDS.

Through diplomacy and entrepreneurship, he successfully navigated the complexity of diverse cultures and regulatory and geo-political challenges while, at the same time, pioneering a strategy of localization on a global scale. He was recognized in 2015 with his induction into the Cable Hall of Fame.

During this time, he was appointed the first Ambassador of UNAIDS, addressing the UN General Assembly on several occasions regarding the pandemic. In 2005, U.N. Secretary General Kofi Annan appointed him founding chair of the Global Media AIDS Initiative, negotiating airtime commitments to fight AIDS.

Roedy, who still resides in London, also is the founding chair of the MTV Staying Alive Foundation, which provides young people with resources at the grass roots level in combination with MTV’s award-winning HIV/AIDS programming. In 2011, Roedy expanded on his HIV/AIDS work by building a portfolio of global health initiatives, reaching the far corners of the world. All have added COVID-19 to their missions.

Roedy was appointed the first Envoy for the Global Alliance for Vaccines and Immunisations (GAVI), an organization founded by Bill and Melinda Gates, rising to vice chair in 2018. GAVI has provided multiple vaccinations to more than 700 million children, saving millions of lives and improving overall health-care systems.

“There is no question that Bill is among the most interesting people in the world,” Riley said. “His extraordinary vision, ability to build alliances for the greater good, and leadership on the world stage exemplifies the best of the Churchillian spirit.”

Besides his 2020 award as Distinguished Graduate of West Point, Roedy’s awards include an Emmy Founders Award, the Leadership Business Award presented by President Bill Clinton, amfAR’s Award of Courage, Doctors of the World Leadership Award, and the UN Correspondents Association Global Citizen of the Year Award, presented by UN Secretary General Ban Ki-moon.

He has also received two honorary doctorate degrees, including an honorary degree from Westminster College and serves on the Board of Directors of the International Churchill Society.

In 2017, Roedy was named a Churchill Fellow for his long-time support of America’s National Churchill Museum on the campus of Westminster College here, where he also delivered the 2011 John Findley Green Foundation Lecture, the same lecture that Churchill was tapped to give 74 years ago.

Founded in 1851 and home of Winston Churchill’s “Iron Curtain” speech, Westminster College in Fulton, MO, focuses on educating and inspiring students to find the power in their purpose in order to become the world leaders of tomorrow. Go here to learn more about Westminster.