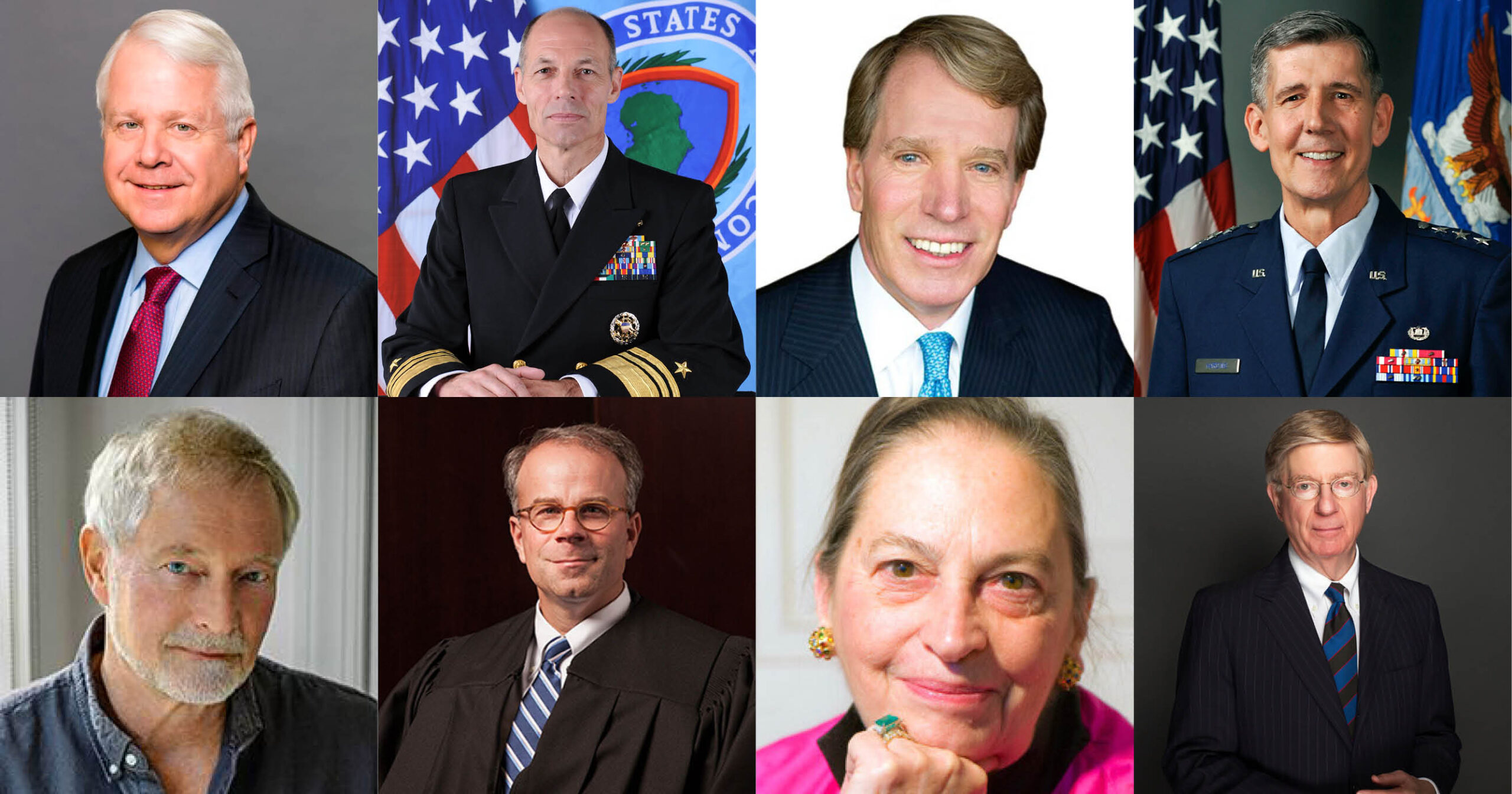 Pulitzer Prize-winning commentator and author George Will is among eight distinguished individuals who were inducted into the Association of Churchill Fellows on Saturday, Mar. 6, by the Board of Governors of America’s National Churchill Museum.

Will, a longtime Washington Post columnist, author of 13 books, and a contributor to MSNBC, also delivered the 34th Enid and R. Crosby Kemper Lecture on Friday, March 5, when Westminster College and the Museum hosted virtual ceremonies commemorating the 75th anniversary of former British Prime Minister Sir Winston S. Churchill’s “Sinews of Peace” speech in the Historic Gymnasium at Westminster.

For the first time in its history, due to COVID-19 precautions, the Kemper Lecture was livestreamed. It also was free and open to the public, and more than 2,200 people watched from around the globe.

Will was inducted into the Association with other prominent authors and journalists, military experts, a federal judge, and two successful CEOs. They are:

Keith S. Harbison of St. Louis, MO: Harbison is the founder and managing partner of St. Louis-based investment and management company Alitus Partners, which specializes in providing capital and operational expertise to corporate clients. He founded Alitus in 2014 after serving as chair and president of St. Louis-based Pretium Packaging, one of the largest plastic bottle manufacturers in North America.

U.S. Air Force Lieutenant General (Retired) Richard C. Harding of Columbia, MO: Gen. Harding served in the Air Force from 1980 to 2014. His last assignment was The Judge Advocate General (TJAG) in Washington, DC, where he was the chief legal advisor to the secretary of the Air Force and had professional oversight of the work of about 4,000 judge advocates, civilian attorneys, enlisted paralegals, and civilian attorneys representing the Air Force worldwide.

Erik Larson of New York City: Larson has authored six New York Times bestsellers, including his newest book, The Splendid and the Vile: A Saga of Churchill, Family, and Defiance During the Blitz. It examines how Winston Churchill and his “Secret Circle” survived the German air campaign of 1940 to 1941. He also has been a journalist with Bucks County Courier Times and The Wall Street Journal, and he has served as a contributing writer for Time, The New Yorker, The Atlantic Monthly, Harper’s, and other publications.

The Honorable Michael Y. Scudder of Chicago, IL: Judge Scudder sits on the U.S. Court of Appeals for the Seventh Circuit, a post he has held since May 21, 2018. During his career, he was in private practice, clerked for Judge Paul V. Niemeyer of the U.S. Court of Appeals in Richmond, VA, and U.S. Supreme Court Associate Justice Anthony Kennedy, and was an assistant U.S. attorney for the Southern District of New York, counsel to the deputy attorney general on the National Security team, and General Counsel of the National Security Council.

Cita Stelzer of Scottsdale, AZ: Stelzer is a freelance editor and journalist and the author of two highly successful books about Churchill: Dinner with Churchill and Working with Winston: The Unsung Women Behind Britain’s Greatest Statesman. Stelzer is currently a researcher at Churchill College, Cambridge, England, where she conducted most of her research for Dinner With Churchill. She is a member of the Board of the Churchill Centre in Cambridge, England.

George Will of Washington DC: One of the nation’s most influential columnists to cover politics and domestic and foreign affairs for The Washington Post, Will is a native of Champaign, IL, and has been writing his column for The Post since 1974. He received the Pulitzer Prize for commentary in 1977 and is a regular contributor to MSNBC, where he provides commentary on politics today. He is a prolific writer, who has authored 13 books, and is a baseball aficionado.