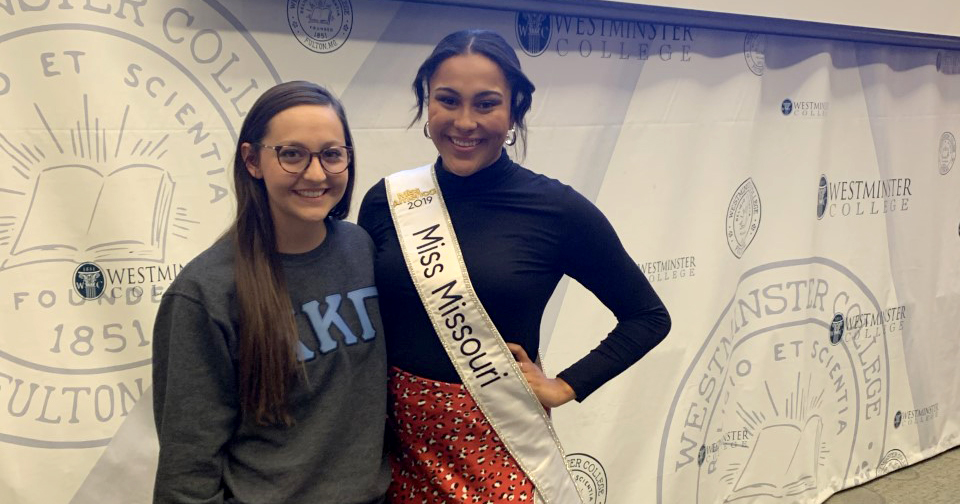 Sponsored by the College’s Panhellenic Council, Esters’ presentation focused on Greek life and how to get the most out of one’s sorority or fraternity involvement.

In her talk, Esters emphasized that she leaned heavily on her sorority experience during the Miss America competition on December 19, 2019, where she earned the title of second runner-up.

A senior and member of Alpha Chi Omega at the University of Missouri-Columbia, Esters previously served as a delegate for MU’s Panhellenic Association.

Esters was crowned Miss Missouri in June 2019 at Missouri Military Academy in Mexico, MO. In addition to her crown, Esters was the overall evening wear and social-impact statement winner as well as the overall talent winner, earning more than $14,000 in scholarship money.

Throughout her year as Miss Missouri, Esters has actively promoted her social-impact initiative of “Leave Your MARK,” which emphasizes the importance of mentoring, especially in the lives of at-risk children. She advocates for the increase in both the quality and quantity of positive mentoring relationships. In addition, Esters has developed her own 501(c)3 non-profit called Writeous Girls, Inc., which is founded upon a curriculum that works to empower young girls through writing in all forms.

As Miss Missouri, Esters serves as ambassador to the Children’s Miracle Network and volunteers with local organizations such as True North and the Ronald McDonald House. Prior to her Miss Missouri crowning, Esters served as Miss Metro St. Louis.