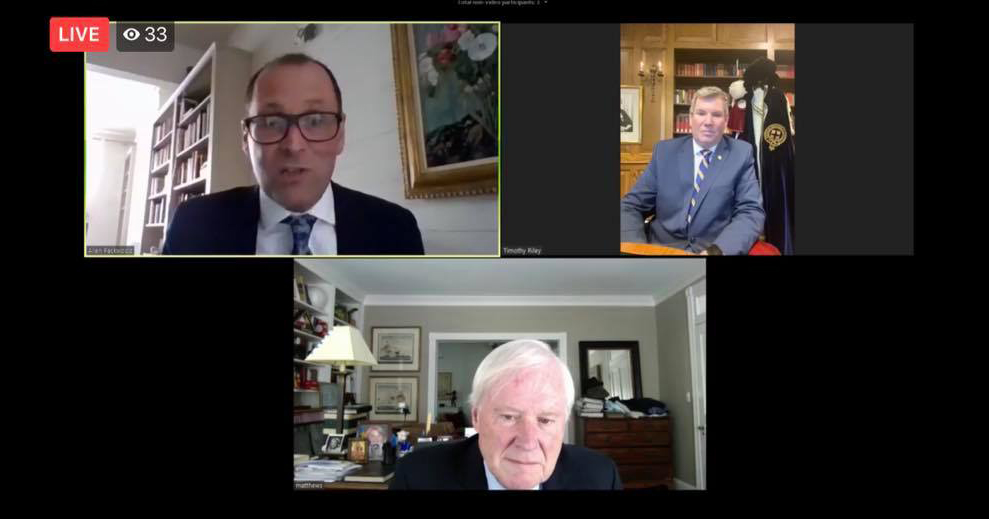 America’s National Churchill Museum (ANCM) on the Westminster College campus will host a second “Churchill This Day” live webcast at noon CDT on April 17. The webcast — featuring Churchill Fellows Andrew Roberts, biographer, and Gen. (Ret.) David H. Petraeus  — follows a week packed with activities and headlines at the Museum despite its physical closure for COVID-19.

Last week, the Museum hosted a livestreamed webcast on April 9 with retired MSNBC correspondent Chris Matthews and Allen Packwood OBE, director of the Churchill Archives Centre in Cambridge, England. The webcast celebrated National Churchill Day, which coincides each year with Churchill’s U.S. citizenship which was instituted by President John F. Kennedy on April 9, 1963.

In addition to the lively discussion, found here, the Museum indirectly received a mention by Gov. Andrew Cuomo of New York on national television. That brief segment from April 11 can be found here.

The reference to Winston and Clementine Churchill’s granddaughter Edwina Sandys is the result of a collaboration between Sandys and Timothy Riley, the Sandra L. and Monroe E. Trout Director and Chief Curator of America’s National Churchill Museum.

Sandys, an artist, New Yorker and longtime friend of the Museum and Westminster College, signed a copy of her book Winston Churchill: A Passion for Painting that Riley included in a package with a desk-sized bust of Churchill. In an accompanying letter, Riley offered Cuomo words of encouragement by employing Churchill’s favorite wartime message: “K.B.O.,” or “Keep Buggering On.”

The worldwide COVID-19 pandemic that forced ANCM to close temporarily on March 15 has not deterred the Museum from hosting events. In addition to the “Churchill This Day” livestreams, ANCM is showcasing rarely seen artwork and speeches on its social media pages.

In a letter to the Westminster community about last week’s webcast and the package sent to Cuomo, Riley echoed Churchill’s words in a statement concerning ANCM persevering despite adversity.

Riley wrote, “Despite the physical closure of ANCM and the Westminster College campus, I want to assure you that we at America’s National Churchill Museum find these trying times have the potential to be our own ‘finest hour.’”

Join the Museum here for the April 17 webcast.