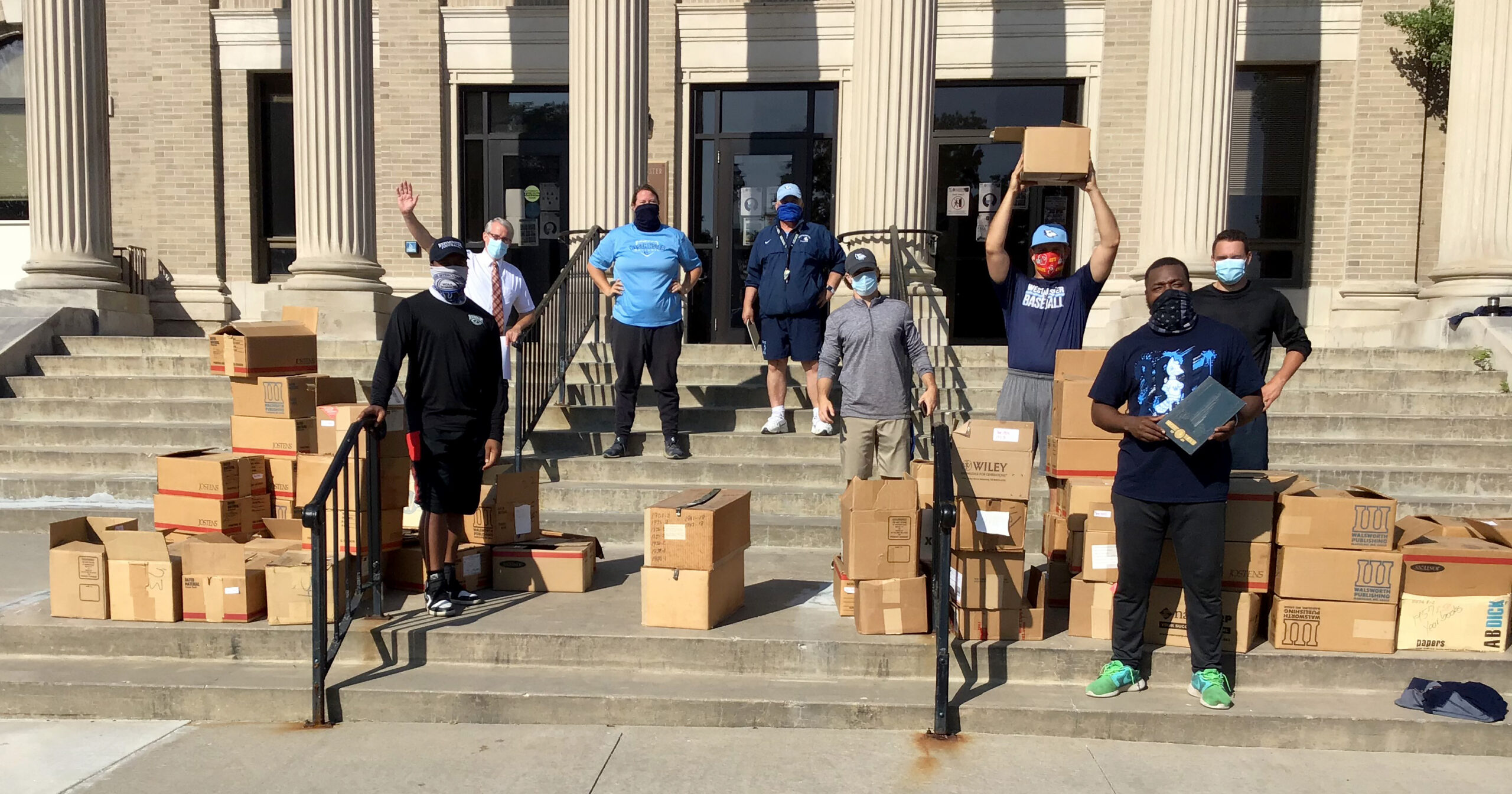 By Matt Mitchell, Director of Athletics and Lead Picker Extraordinaire

As many will understand, the fall of 2020 has been unlike any that we have witnessed on campus. With the shutdown of sports, fewer people on ground, and most buildings with less than normal occupancy, it was an opportune time to take on a massive inventory and clean-up in most of our campus buildings. Our Athletic Department embraced this project, found a way to have some fun doing the work, and managed to uncover some hidden gems.

For health and safety purposes, we divided the department into working pods/bubbles based on each coach’s office location. Each pod consisted of three to four individuals, which included a crew leader. Because of the tight quarters, each pod was assigned one morning a week at each specific location. This organizational system allowed the coaches to continue their primary teaching, coaching, and recruiting duties throughout the course of a week while providing a great benefit to the College.

Our objective was to identify historic items that need to be archived, to eliminate unwanted items, to move operational furniture to permanent storage, and to identify items of value to for insurance assessment.

The following is an amateur writer’s interpretation and description of our adventure in the style of popular TV series American Pickers. Note: “NFS” stands for “Not for Sale.”

Several years ago, the pool was taken offline because of the exorbitant cost to maintain. Many of the working parts were extremely difficult to replace or repair. During the years following, the pool became a place for things to be stored, including old, worn-out equipment. In other words, the pool was a Westminster Picker’s heaven. Trophies, many pictures taken by Pat Kirby, and filing cabinets full of Terry Logue’s historical records gave the Pickers plenty to sort through.

Three mornings of picking led to some good finds and a dumpster full of trash and recyclables.

Scorebook from the First Basketball Season at the Historic Gymnasium 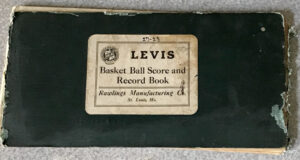 The Blue Jays played many random opponents that season, including a paint company from Jefferson City.

To be Placed in Archives 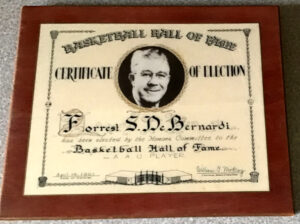 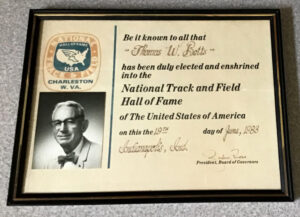 Location – The Museum Annex (Who Knew?)

I guess we can call it an Annex. It’s more like a stone fortress of “C and C”: We pickers call that “Crap and cool.” We will not share the exact location, because it may contain some items of value. Crap was discarded and loaded into the dumpster by Team Galla. Thanks to Softball Coach Sarah Stafford for the use of her trailer. This dumpster load was our second of the season. This episode involved six complete working mornings, as each item was inventoried and identified with a picture and by size. 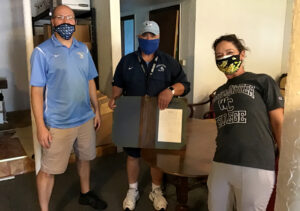 Valued – NFS to be Stored in Archives

A Giant Model of London Constructed by Churchill Academy Students: Perfect for Playing Barbie and Ken Go to the U.K. 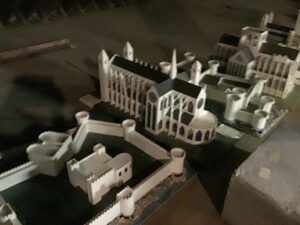 Valued – To be Appraised

Numerous other cool items will ultimately need to be evaluated to discover their worth.

For those who have been to the attic at the alumni house, you will know that the amount of alumni records and memorabilia donations have been accumulating through the years. J.R. Andrews, Vice President of Institutional Advancement, was kind enough to let us move these many boxes of paper out of the attic, along with some items that could no longer be of use. The alumni information has been scanned; therefore, paper copies will be shredded at another date. Our primary objective was to relieve the pressure off the structure. The only item of note was a document with in-depth personal financial information from Class of 1988 Alumni Ken Theroff, Gary Henson, and David. I have placed those details on the College’s website (Picker humor).

Valued: To be Assessed in Years to Come

Episode 4: Everything Except the Columns

“Oh my!” “Wow!” “Unbelievable!” “I’m surprised the building is still upright!” These are just some of the comments heard during this episode. Washington West was a storage area for almost everything that took place on the Hill. Yearbooks and more yearbooks were piled high, as were historical records from years and years of college activity. Did I mention yearbooks? We also found presidential records and old alumni records, and ancient donor records. It was a massive undertaking by our department. Our primary objective, once again, was to relieve weight and pressure off of the structure and identify items of value.

This was the building that most of us were dreading yet excited to pick. After filling up a nine-foot dumpster, it was decided by our Inventory Specialist to acquire a 15-foot dumpster. Two loads later, here are a few of our great finds:

18th-Century Samurai Armor and Helmet (or Just an Old Costume) 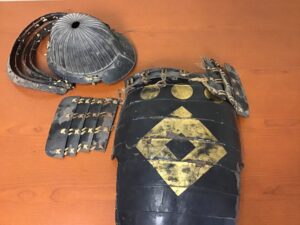 Valued: To be Authenticated

Picture of Coach Welty During His Freshman Year of Football 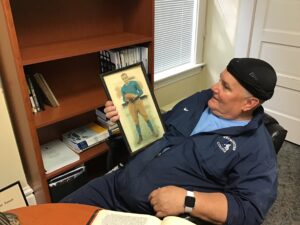 Valued: Cost of Time Due to the Amount of Laughter That Took Place 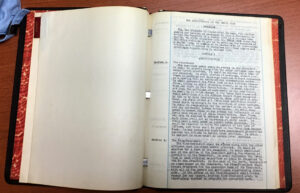 This group requested their own organization because they did not have an interest in joining a fraternity (the original GDIs).

Valued: NFS and to be Moved to Archives 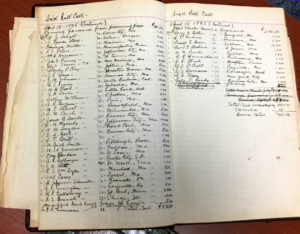 Many interested individuals were asked to donate to the College. C.F. “Dog” Lampkin played a prominent role in the “sixth roll call,” and the total giving was nearly $175 for the day.

Valued: NFS and to be Moved to Archives

Please know that great care was taken prior to making any decisions regarding dismissal of items. When an item was in question, it was saved. Any items that could help tell the Westminster story were saved. Any items with potential monetary value were saved and recorded.