Wartburg Pulls Away In Second Half To Defeat Blue Jays, 75-68 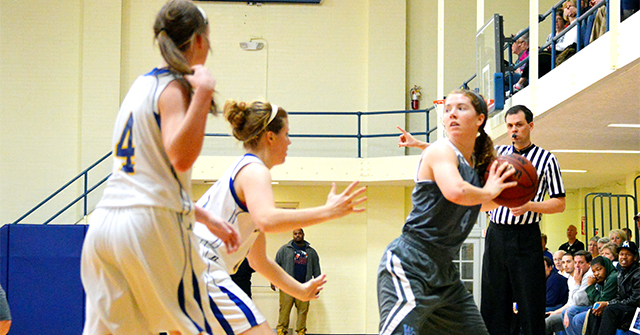 The Westminster women’s basketball team fell to Wartburg College on Tuesday evening, 75-68. The loss brings the Westminster Blue Jays to 1-2 on the season.

“Wartburg is a really nice team,” stated Head Coach Tracey Braden. “They are balanced, deep and play very well together.” The Wartburg Knights move to 5-0 after the win.

The Knights strung together a 9-0 run to start the game, forcing the Blue Jays to call a timeout just two minutes in. Junior Kasey Gatson lit the fire with a three-pointer to finally put the Blue Jays on the board, and an 8-2 Blue Jay run ensued to bring the game to 13-11, Wartburg.

A shot by senior Danielle Williams brought the Blue Jays within one point with 8:31 left in the first half, 25-24. Sophomore Andrea Zalis then sank a three-pointer to knot the game at 27-27, and a three from sophomore Payton Gruber gave the Blue Jays their first lead of the game, 30-29.

The Knights quickly took the lead back with a layup, followed by four more points. A layup by junior Mackenzie Haddox tied the game at 39-39 with 38 second left in the half, but Wartburg laid in a shot to head into halftime with the 41-39 lead.

Gatson dropped a three in just 30 seconds into the second half to bring the game within one, 43-42, but Wartburg put up two layups to pull away again. With 11:12 to go, the Knights grabbed their largest lead of the game, 64-52.

The Blue Jays rattled off two three-pointers to cut their deficit to under 10, and a layup by Williams put the game within six, 66-60.  Over the next five minutes, Wartburg held Westminster from attacking the basket while putting up seven points. Haddox went 4-4 from the free throw line in the final two minutes, and Williams scored the final points of the game with a put back, ending the game with a 75-68 loss.

“The game was a good learning experience for us,” stated Haddox. “We know what is working for us and what needs to be improve. We will make sure to capitalize on that to prepare for the rest of the season.” Haddox finished the game with 15 points and three assists.

Zalis led the Blue Jays on offense with 22 points and on defense with eight rebounds.

“This was a good battle for us, and I believe we will use it to make us better,” added Coach Braden.

The Blue Jays host Webster University on Wednesday, December 3, at 6:00 p.m. for their home opener and first conference game. The 2013-14 Westminster women’s basketball team will be recognized for their academic success last season prior to the game. The ceremony for earning first place on the WBCA Academic Top 25 Team Honor Roll is set to take place at center court in the Historic Gymnasium at 5:50 p.m.