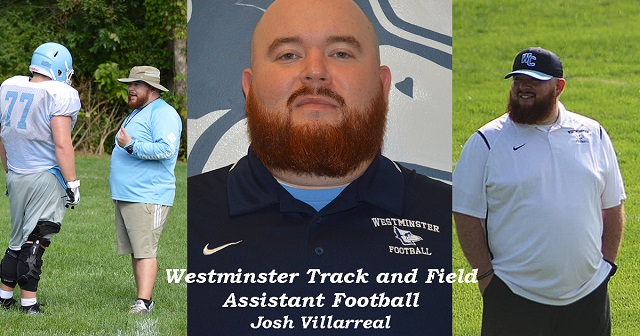 Josh Villarreal has been named the Head Men’s and Women’s Track and Field Coach at Westminster, along with a secondary duty of coaching the offensive line for football, announced Director of Athletics Matt Mitchell.

“I am extremely grateful for the support and backing of the athletics department and the Westminster faculty and staff,” said Villarreal. “I promise to do everything in my power to exceed expectations. I am thrilled to continue my career at Westminster College and beyond ready for this new endeavor. I can’t wait to grow alongside the great student-athletes here at Westminster.”

Villarreal joined the Blue Jays in July 2017 to help as an intern with the football team, coaching the offensive line. Along with his football experience, Villarreal brings design and social media skills to the department, handling the social media accounts for football and now track and field, which will enhance and market both programs effectively.

Along with football, Villarreal brings a wealth of recruiting experience to both the track and football programs, having successfully recruited in the Midwest, specifically in Missouri, Arkansas, and Texas.

Villarreal successfully led a young offensive line during the 2017 football season, including helping sophomore Sam Poole to an All-Conference bid his first year on the field.

He will have an immediate impact in the track program with his familiarity of the team, as 12 of the 28 track and field athletes from last season also played football, including several on the offensive line that Villarreal spear-headed in the 2017 football season.

Prior to Westminster, Villarreal was most recently with the Peru State College football team where he coached tight ends, the offensive line, long snappers, and kickers. While serving as the social media director, he was also in charge of Iowa, Austin, and Dallas recruiting areas.

At Peru State, the offense ranked No. 4 in the NAIA for total rushing offense and offense per game.

During the 2015 season, Villarreal was a graduate assistant at Howard Payne, coaching the offensive line and long snappers.

His first college coaching job was at his alma mater, Bethany College, where he helped coach the running backs and special teams in 2014.

Villarreal was a four-year letter winner at Bethany as an offensive lineman from 2010-14 and was a two-time Kansas Collegiate Athletic Conference Scholar Athlete.

He earned a degree in Health and Wellness with an emphasis in education and coaching from Bethany in 2014.