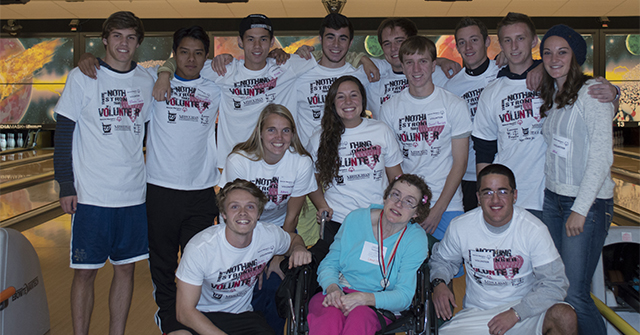 Finding the so-called perfect group of volunteers is not easy. It’s important that they are dedicated, easy-going, hard-working and most important, dependable. For SOMO Central Area Program Director Diane Brimer, however, that perfect group fell in her lap a few years ago.

“I had gotten contacted by Westminster Student Athlete Advisory Council staff who was interested in getting (its students) involved with Special Olympics,” Brimer said. “So when I got ready to do my bowling tournament in Fulton, I contacted them just to see if I could just get some of the students to come out … what they decided to do is take this event and now this is their event that they volunteer for.”

Between the different sports teams at Westminster, Brimer said she has enough volunteers to cover six different sessions of her Area Bowling Tournament in Fulton every fall.

“One of the greatest things is that I can make one contact and then they are recruiting the volunteers for me, so I can put my efforts into preparing for the event,” Brimer said. “That partnership is helping me make it happen and put my efforts and time into other things that make the tournament a success. It’s been great.”

While the idea was passed down from the SAAC at Westminster, the respective coaches of the teams involved have embraced the volunteering philosophy.

“We’ve done it for a few years now… the kids really enjoy it,” said Denny Hughes, Westminster’s baseball coach. “It’s a great opportunity for them.”

Hughes said volunteerism is something he tries to instill in all of his players as being an integral part of being not just on the team, but as a functioning member of society as well.

“We are more than happy to come out,” Hughes said. “We wanted to do community service within our baseball program any way and this gave us a great opportunity to do so.

After a few years of being involved in this process, the student-athletes view volunteering as just one more thing that is expected of them as is going to class and practice. They revel in that opportunity to get out and give back.

“One thing I think it just helps community wealth; it builds it up,” said Ryan Loethen, a junior baseball player at Westminster.

Another aspect for the athletes isn’t so much on the personal level, but what it does for the team as well.

“I think what we get out of this as a team would be just interacting with other people and being involved in something more than yourself,” Loethen said. “Just taking time out of your day to help people, that’s the main thing that coach wants us to experience.”

Even though most Special Olympics Missouri events are only one or two days a year, Loethen and Hughes said the impact for them can last much longer.

Hughes said, “Giving of yourself is probably the greatest reward you can give to yourself. … The guys talk about it for a long time, so it has a great impact on them.”

Brimer realizes how lucky she is to have the Westminster student-athletes and isn’t planning on letting them stop volunteering anytime soon.

“We’ve had some great group leaders and faculty advisors throughout the years and I hope it never ends,” Brimer said with a smile. “I really don’t.”