Softball Drops Two Close Ones To Washington U. 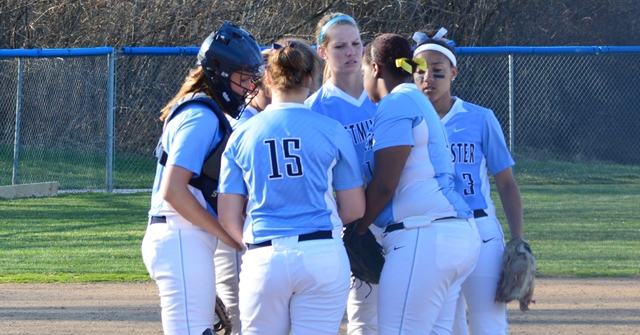 The Westminster softball team dropped two close games to Washington University-St. Louis on Friday evening. The Westminster Blue Jays lost game one, 5-4, and brought game two into extra innings before falling 6-5 after nine innings of play. The Blue Jays are now 9-15 on the season.

The Washington University Bears held a 2-0 lead heading into the fourth inning of game one, but freshman Alyssa Johnson hit her first collegiate homerun to center field, scoring three runs and taking the 3-2 lead.

The Bears scored a run in the bottom of the fourth to tie up the game and another in the fifth to take the 4-3 lead.

The Blue Jays rallied in the top of the seventh to tie up the game. Senior Brittany Lee led-off with a single and advanced to second with freshman Madison McKindley’s sacrifice bunt. Freshman Charlotte King bunted, bringing Lee to third, and freshman Bri Peterson stepped up to the plate and singled to left field, scoring Lee. The Bears closed down the Blue Jays chance to score again, leaving the game tied at 4 heading into the bottom of the seventh.

The Bears managed to make bases loaded and with two outs, the Bears hit a RBI single to bring in the winning run.

The Bears started game two off with three runs in the bottom of the first. Senior Rai’an Harris led-off the second with a double to left field. She advanced to third with freshman Anne Baker’s at bat and scored on Johnson’s RBI single, bringing the score to 3-1.

The Bears hit a homerun in the bottom of the second, taking a 4-1 lead.

In the top of the fifth, the Blue Jays got their bats swinging. On two outs, freshman Allison Biggs reached on an error. Harris hit her second double of the night to score Biggs. Baker was walked and Johnson singled to shortstop, bringing Lee up with bases loaded. Lee singled to shortstop, scoring Harris, and McKindley singled through the right side to score Baker. The Blue Jays ended the inning with four hits and three runs to tie the game at 4.

In the bottom of the seventh, the Bears had to score or the game went into extra innings. With two outs and bases loaded, the Bears hit a single to shortstop. The runner on second advanced to third, but was caught in a pickle and finally thrown out to end the inning.

Peterson was placed on second in the top of the eighth and was advanced to third with freshman Liz Carthen’s sacrifice bunt. Peterson was brought in with Bigg’s RBI single to take the 5-4 lead, but the Bears tied the game back up in the bottom of the eighth.

The Bears ended the Blue Jays chance with three up, three down in the top of the ninth. With one out in the bottom of the ninth, the Bears hit a RBI single to center field to bring in the winning run.

Freshman Alyson Hahn (2-5) pitched the complete game and was credited with the 6-5 loss. Harris went 3-3 from the plate, scoring twice; McKindley went 3-5 from the plate.

The Blue Jays will celebrate senior day on Saturday, April 12, as they host Principia College for a doubleheader starting at noon.