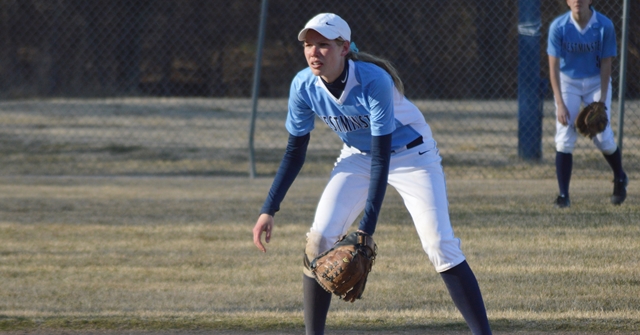 The Blue Jays scored the two runs of game one versus Simpson in the sixth inning with a RBI single by freshman Liz Carthen and a RBI double by senior Brittany Lee.

Lee (8-11) was credited with the loss after pitching the complete game. Carthen and Lee each went 2-3 from the plate.

In game two versus Simpson,the Blue Jays scored their first run off an error in the fifth inning to bring the game to 3-1, Simpson’s lead. In the sixth inning, Lee hit a RBI double to left field to score Carthen. The Blue Jays were unable to score again, ending the game with a 3-2 loss.

Freshman Alyson Hahn (3-6) was credited with the loss after pitching the complete game. Lee went 2-3 from the plate.

On Wednesday, Coe started off the first game with a run in the first and second to take a 2-0 lead. In the top of the fourth, a RBI single by Lee up the left side scored freshman Anne Baker and moved freshman Alyssa Johnson to third. On the next at bat, Lee went to steal second. Coe threw her out at second, but Johnson scored on the throw, tying the game at 2.

Coe answered back with four runs in the bottom to take a 6-2 win.

Hahn (3-7)  pitched the complete game and was credited with the loss. She struck out five. Johnson went 1-2 from the plate.

In game two, Coe took a 6-0 lead heading into the sixth inning. In the top of the sixth, freshman Allison Biggs hit her fifth homerun of the season. The Blue Jays were held from scoring again, ending the game with a 6-1 loss.

Lee (8-12) was credited with the loss after pitching the complete game. Senior Rai’an Harris went 2-3 from the plate.

The Blue Jays will face Webster University on Thursday, April 17 at 5:00 and 7:00 p.m. in Webster Groves, Missouri.