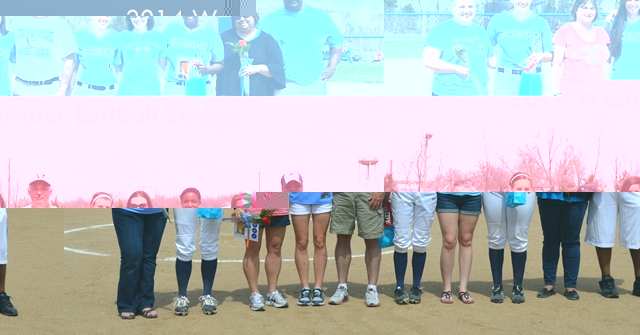 The Westminster softball team downed Principia 7-0 in game one and short-gamed them 16-8 in game two for a conference sweep on Senior Day Saturday afternoon. The Westminster Blue Jays slide into fourth place in the St. Louis Intercollegiate Athletic Conference (SLIAC) with a 8-6 conference record and a 11-15 overall record. Senior Brittany Lee and freshman Allison Biggs tied the game-day homerun record in game two with two homeruns each.

The Blue Jays started off game one in the bottom of the second with a hit by freshman Alyssa Johnson who later scored on an error.

The Blue Jays added two more runs in the fourth. Freshman Bri Peterson reached on an error by right field and advanced to third on the play. Rose then hit a sacrifice fly to left field to score Peterson. Baker later hit a RBI single to score Biggs and bring the Blue Jays a 7-0 lead.

The Blue Jays were held from scoring again, ending the game with a 7-0 shutout win.

Lee (8-10) held Principia to just one hit in her complete game shutout win. She faced 23 batters and struck out 12. Johnson finished the game with 11 putouts.

In the bottom of the third, the Blue Jays’ started up their bats. Johnson singled and Lee followed with a two run homerun to bring the Blue Jays within four, 7-3.

In the fourth, the Blue Jays continued their rally. Freshman Charlotte King singled, followed by a double by Peterson. Rose hit a 2 RBI single and was brought in with Bigg’s RBI single. Harris and Johnson singled, and Harris scored the tying run on an error by shortstop. The Blue Jays ended the fourth tied at 7.

In the fifth, the Blue Jays added six more runs. King scored on Rose’s RBI single, and Biggs hit a two run homerun to bring in Rose. Harris doubled and Johnson singled, bringing Lee up to bat. Lee hit her second homerun of the game as a three run homerun to take the 13-7 lead.

Principia added a run in the sixth, but Biggs led-off the bottom with her second homerun of the game. Johnson singled and later scored on an error by shortstop, and freshman Alyson Hahn put the final touch on the game with her RBI single to score Lee as the winning run.

Hahn (3-5) was credited with the win after coming in as relief. She pitched 3.1 innings, struck out seven and allowed only one run.

The Blue Jays will head to Indianola, Iowa on Tuesday, April 15 for a doubleheader at Simpson College. First pitch will being at 3:00 p.m.