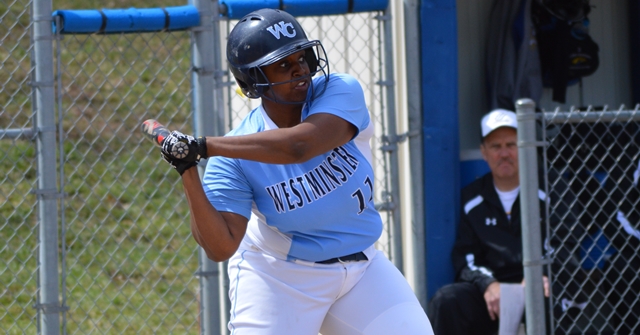 Jacksonville, Ill. – Senior Rai’an Harris ties two game-day records and breaks a career record in Saturday’s softball sweep over MacMurray College. Harris cracked two homeruns in game one to tie the game-day record, including a grand slam in the third inning, to aid in the Blue Jays’ 9-1 win after six innings of play. She also recorded six RBI in the win, tying the game-day RBI record. She then went on to break the career putout record in the game two 6-2 win with a total of 718 putouts.

The sweep over MacMurray ended their regular season conference play with an 11-7 record. The Blue Jays are now 14-20 overall.

Harris started off game one with a grand slam in the third, giving the Blue Jays a 4-0 lead. MacMurray scored a run in the bottom of the fourth, but the Blue Jays answered with two homeruns in the fifth inning. Freshman Allison Biggs led-off with a single and freshman Liz Carthen went in to pinch run. Harris came up and hit her second homerun of the day, tying both game-day records in one play. Senior Brittany Lee came up later in the inning with two outs and hit a two RBI homerun to score herself and freshman Madison McKindley.

The Blue Jays brought their lead to eight runs in the sixth after Biggs hit a RBI ground out to score freshman Bri Peterson. They held MacMurray from scoring in the bottom of the sixth, ending the game with a 9-1 win.

The Blue Jays took a 1-0 lead in the third inning of game two with a RBI single by Harris, scoring Peterson. They put up two more runs in the fourth.

MacMurray scored two runs in the bottom of the fourth to bring the game within one, 3-2.

Freshman Alyson Hahn (5-7) was credited with the complete game win. She pitched seven innings and struck out six.

The Blue Jays will face Cornell College on Thursday, April 24 for their final regular season doubleheader. First pitch is at 4:30 p.m.