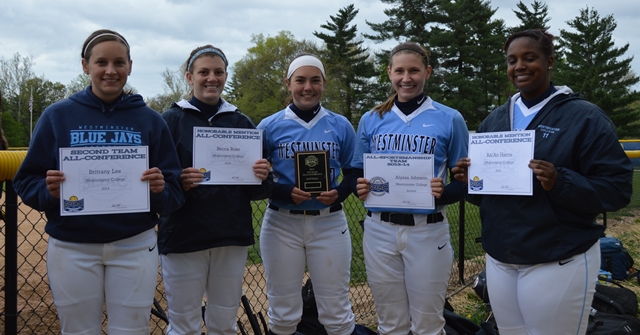 The Westminster softball team closed out the 2014 season in their second consecutive St. Louis Intercollegiate Athletic Conference (SLIAC) Tournament. The Westminster Blue Jays lost both games in the double elimination tournament, ending their season with a 14-22 record. They finished conference play with a 11-7 record that landed them in fourth place in the SLIAC.

The Blue Jays had five that earned SLIAC All-Conference honors.

Freshman Allison Biggs was named to the SLIAC All-Conference First Team. She had a .347 batting average and a .585 slugging percentage. She led the team with 22 runs, 10 doubles, six homeruns and 26 RBI. She concluded the season with five sacrifice hits and one sacrifice fly, and holds a .973 fielding percentage on the season.

Senior Brittany Lee was named to the SLIAC All-Conference Second Team. She finished the season with a 6.03 ERA and pitched 18 complete games. She pitched 149.1 innings and struck out 127 batters. She also recorded nine wins, two shutouts and one save. Lee was also a power house from the plate. She batted a .364 and hit four homeruns. She recorded a .591 slugging percentage and finished with 19 RBI. Lee broke five career pitching records throughout the year including the records for wins (31 wins), shutouts (4 shutouts), saves (3 saves), innings pitched (444.1 innings) and strikeouts (388 strikeouts).

Lee was also selected to the SLIAC All-Tournament Team.

Seniors Rai’an Harris and Becca Rose were named to the SLIAC Honorable Mention. Harris had 202 putouts throughout the season, breaking the Westminster career record with a total of 729. She led the Blue Jays with a .986 fielding percentage and broke the career fielding percentage record with a .982. Harris batted a .333 with six doubles and three homeruns. She also had 15 runs and 24 RBI. Rose broke the Westminster career record for sacrifices with 16 after recording nine sacrifice hits and one sacrifice fly throughout the season.  She batted .252 and scored 12 runs.

Freshman Alyssa Johnson was selected to the SLIAC All-Sportsmanship Team.