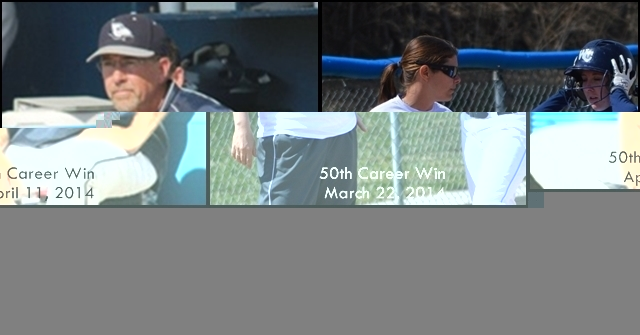 The Westminster baseball and softball coaches hit their 50th career win at Westminster during the 2014 season.

Head softball coach Shelli Manson grabbed her 50th career win on March 22 in the 6-5 game two win over Blackburn College. This is Manson’s fifth year as Westminster’s head coach. She entered this season with a 45-71 record and one St. Louis Intercollegiate Athletic Conference (SLIAC) Tournament appearance. The Blue Jays are currently 9-15 on the season with a 6-6 conference record.

Head baseball coach Denny Hughes won his 50th career game on April 11 with the 1-0 shutout over Principia. Hughes is in his third year as Westminster’s head coach. He entered the season with a 38-34 record and two SLIAC Tournament appearances. The Blue Jays are currently 12-8 on the season with a 6-6 conference record.

Both teams will host Principia College for a doubleheader on Saturday, April 12. Softball will celebrate senior day with game one starting at 12:00 p.m. Baseball’s first pitch will be thrown at 1:00 p.m.