The Art of Diplomacy: Mike Butera ’11 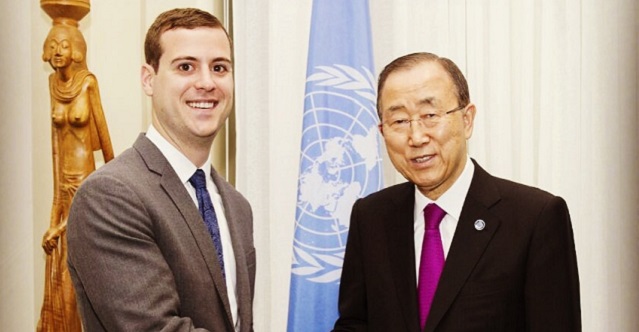 Mike Butera ’11 turns a passion for government and international relations into a growing career with the U.S. Department of State in Washington, D.C. Pictured here with U.N. Secretary General Ban Ki-Moon during the U.N. Disarmament Fellowship on Oct. 13, 2016.

Mike Butera ’11 isn’t one to rest on his laurels. From his early days at Westminster College in Fulton, Missouri, to his current position at the U.S. Department of State in Washington, D.C., Butera has not only spent his career seeking challenge after challenge, but he’s also continually excelled at them. Today, he serves the U.S. Department of State as a Foreign Affairs Officer. He also recently served as the U.S. delegate for the U.N. Disarmament Fellowship, a program that brings together delegates from around the world to develop greater expertise in disarmament and a better understanding of security and disarmament concerns of the international community.

“The Department of State nominates one junior staff member every year to put forward for the fellowship, and the U.N. picks one nominee from 25 different countries to be U.N. disarmament fellows,” Butera says.

Selected fellows spend two and a half months traveling to U.N. offices in Geneva, Vienna, The Hague and New York, as well as study visits hosted by other governments. This year the governments of Switzerland, Germany, China, South Korea and Japan hosted visits. During the trip, Butera and his colleagues heard lectures on conventional arms control, nuclear disarmament and nuclear nonproliferation from U.N. and government officials at the highest levels.

“The fellowship gave us a chance to learn from them and study the various ongoing arms control and nonproliferation initiatives,” Butera says. “We also had a chance to observe meetings at many U.N. forums and see international relations in action.”

It’s a position he doesn’t take lightly. For Butera and the other fellows in the program, the connections they’re making now will, in many ways, determine the course of their careers.

“The other fellows I traveled with work on similar topics as I do and will be my colleagues in other foreign ministries for the rest of my career,” Butera says. “The relationships I built during the fellowship will be indispensable during future meetings and negotiations.”

After graduating from Westminster in May 2011, Butera made the move to Washington, D.C. to pursue an M.A. in Security Studies at the Walsh School of Foreign Service at Georgetown University, where he studied nuclear security and nonproliferation. While he was still in graduate school, he interned at the Department of State in an office that combats nuclear terrorism. He graduated from Georgetown in May 2013 and was selected as a finalist for the Presidential Management Fellowship (PMF) in April 2014.

The PMF is a training development program so prestigious that only 5 percent of candidates are selected as finalists. It was through the PMF program that Butera found his current position as a Foreign Affairs Officer in the Office of Multilateral Nuclear and Security Affairs in the Bureau of International Security and Nonproliferation (ISN/MNSA) at the U.S. Department of State. In ISN/MNSA, he works to develop the U.S.’s nuclear weapons disarmament and nonproliferation policy and participates in U.S. delegations to multilateral forums at organizations such as the U.N., EU, NATO and the G7.

“The most fulfilling thing about my job is that I’m in a position to make a real contribution towards achieving a world without nuclear weapons and to protect the world from the danger of nuclear weapons spreading to other countries and from getting in the hands of terrorists,” Butera says. “Admittedly, I currently play a very small role, but I still take pride that my efforts can contribute towards making the world more safe and secure.”

Butera is modest about his contributions. That “small role” he plays has included seeing his words and ideas used by U.S. representatives at major international meetings.

“This has happened at NATO, EU and U.N. meetings,” he says. “The biggest thrill so far was seeing that a paper I had at written at State was used as the basis for a very well-received speech made by the U.S. Ambassador to the Conference on Disarmament in Geneva.”

Although Butera graduated with his political science degree from Westminster in 2011, before the College launched its security studies program, he recognizes the benefits the new minor offers to students who plan to pursue his line of work.

“I think the security studies program provides a huge leg up to anyone wanting to get into the field,” he says. “I never had the opportunity to put that on my resume or take the range of classes available under the program. It looks great to employers and grad schools when you can show them the classes you’ve taken and expertise you have developed on a range of security studies topics in undergrad.”

Even without that program, Butera is quick to acknowledge Westminster’s influence on his professional career. He developed his leadership and diplomatic skills as Delta Tau Delta Treasurer and Student Government Association Executive President. Classes on the Vietnam War and the History of America Foreign Policy, taught by Dr. Richard Lael, showed him the importance of understanding other worldviews in regard to diplomacy. He also learned to work as part of an effective team.

“I would say that my time at Westminster gave me the opportunity to develop a valuable set of skills that I’ll use for the rest of my professional career and life,” he says.

“The diversity of Westminster’s student body and faculty gave me an opportunity to experience a wide range of perspectives and worldviews,” he says. “Through this experience I discovered my passion for international relations that has led me to where I am today.”