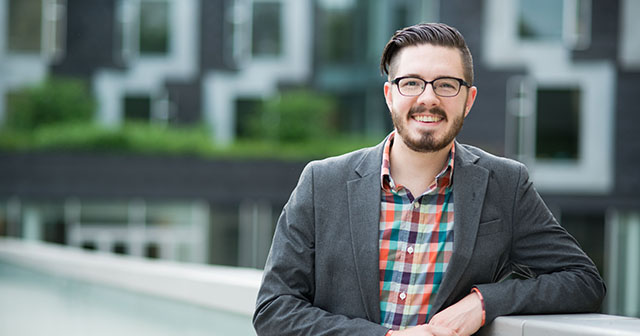 VR and the Trolley Problem: Andrew R. McHugh ’13 and his team at Carnegie Mellon use virtual reality to explore a decades-old ethical dilemma.

Imagine you’re driving a trolley quickly down the tracks when you notice five unsuspecting workers on the path in front of you. If you stay the course, the five workers will die. But if you flip the switch to change the trolley to another track, their lives will be spared, though you will strike — and kill — the one man who’s working on the second track. What do you do?

This classic ethical dilemma was introduced by Philippa Foot in 1967 and adapted in the 1980s by American philosopher Judith Jarvis Thomson: In Thomson’s scenario, the trolley speeds toward the five workers, but this time you could either do nothing or push a large man onto the tracks, which would save the other five. This is the adaptation Andrew R. McHugh ’13 and his team at Carnegie Mellon University are exploring through virtual reality in “Moral Decision-Making and Haptic Feedback in Virtual Environments,” a project recently featured in The Wall Street Journal.

“It was odd to open a link to the Wall Street Journal and see your own work,” says McHugh. “I was honored to be interviewed with my fellow researchers.”

McHugh, who studied philosophy, science of information, mathematics and physics as an undergrad at Westminster College, is a master’s student at Carnegie Mellon, where he studies human computer interaction, with a focus on virtual reality. During his time at Westminster, he also participated in the Career Discovery Program, Urban Design at the Harvard University School of Design and the Summer Institute for Diversity in Philosophy at Rutgers University. He founded the What If..? Conference while an undergrad student and served as its chief curiosity curator for nearly four years. He also worked as a UI/UX front end web developer for Caledon Virtual in Columbia, Missouri; was founder/CEO of Dasein Design, based in Columbia and Pittsburgh; and was a featured panelist on Westminster’s first live Google Hangout, “Talking Innovation.”

For his recent project at Carnegie Mellon, McHugh and his team use virtual reality to explore participants’ reactions to the classic trolley dilemma. Through an Oculus Rift VR headset, the participant sees construction workers standing on suspended platforms around an old laboratory. An alarm bells sounds — the power has gone out, and when the emergency generator turns on, live electricity is running through the floor. Suddenly, one of the platforms holding four workers begins freefalling. The workers will all die if they hit the floor. However, if the participant pushes one worker standing in front of them off the platform, that worker will fall to to his death, but it will save the other four. They have 20 seconds to decide.

McHugh’s team found that 55 percent of people who participated in their virtual reality project pushed an avatar to his death to save the four others. However, when an actual person stood in front of the participant wearing the VR headset so participants felt a real person with their hands and not just the VR avatar, the results changed — only 30 percent pushed the one to save the four.

The project shows that it’s one thing to theorize about what you might do in a hypothetical scenario, but with VR, the life-or-death scenario plays out quickly, right in front of you, and your snap decision might surprise you.

“It is very different when you are right there,” McHugh told the Wall Street Journal.

McHugh says that journalist Amy Marcus, who had been following Trolley Problem research, found their research group from a preliminary write-up they had posted on the Carnegie Mellon web site. McHugh recently returned the U.S. from a year abroad in Portugal, part of his Carnegie Mellon program.