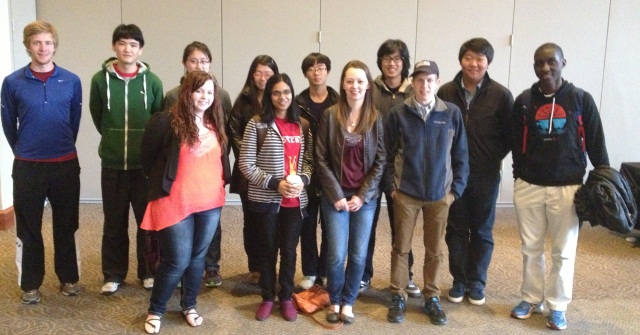 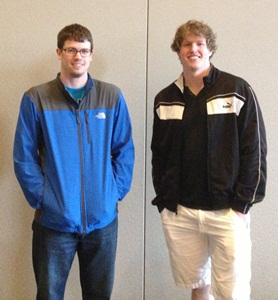 Students who attended the Missouri Collegiate Mathematics Competition are pictured above and right.

While most Westminster College students were on spring break, fourteen of them chose to spend March 26-27 competing in the Missouri Collegiate Mathematics Competition (MCMC), which led to outstanding results for two of the teams.

Out of the 53 teams competing from colleges and universities across Missouri, one Westminster team finished 4th and another one 8th.

Participants began the first session Thursday evening from 7:30 p.m.-10 p.m. and were asked to solve five problems with each problem worth 10 points.  Then from 8:30 a.m.-11 a.m. the next day teams solve five more problems with each problem worth 10 points.  No calculators, computers or references can be used during the competition.  Some partial credit could be earned for substantially correct work toward a solution to the problem.

Problems are scored by the competition committee with the highest team point total being declared the winner.  In the case of a tie, the committee determines the winning team.

Following the competition, the students had group photos, were treated to a pizza party, and received certificates for their participation in the competition.